WMODA | Wiener Museum > Highlights > An Elephant in the Room

An Elephant in the Room

Our latest Ardmore acquisition is a monumental urn, 31 inches tall, featuring elephants and rhinos, which is now on display in our Ardmore room. It’s hard to believe that these giants of the animal kingdom are being slaughtered in huge numbers for their ivory. The World Wildlife fund urges us not to ignore the poaching problem like the proverbial “elephant in the room”.

Fée Halsted, the founder of Ardmore, describes this magnificent urn: “It shows an Eden where heaven exists on earth in the African Bush with abundant herds in lush vegetation of wild fruits and plants. Yet it is all about to be destroyed by the greed for ivory from some Eastern cultures. Our continent is being raped and plundered. Africa is losing their most precious treasures.”

Elephant poaching continues to be a threat to the survival of elephants in many parts of Africa despite the ban on international ivory trading. The WWF estimates that up to 25,000 animals are killed annually around the world. In some countries of Africa, including Senegal, Somalia and Sudan, elephants have already been driven to extinction. Elephants are highly praised for their intelligence and they share the same emotions and cognitive behavior as humans. They grieve for their lost loved ones, they feel fear, joy and empathy.

In some countries, ivory continues to be a symbol of wealth, status and power, but stemming demand from consumer countries is fundamental to the survival of elephants and rhinos. Save the Rhino reports that more than 7,245 African rhinos have been lost to poaching in the last decade – that’s roughly three rhinos a day! The problem is particularly serious in the province of KwaZulu-Natal where the Ardmore studio is located.

To draw attention to the plight of these endangered animals, the Ardmore artists often feature elephants and rhinos in their ceramic art. In some cases, they use a natural ivory color to symbolize the tusks for which many of these magnificent animals died a tragic death. In the last 33 years, elephants and rhinos have been featured on Ardmore vases, urns and rider sculptures, as well as Cole & Sons wallpapers and Hermès scarves.

The new Ardmore urn at WMODA was sculpted by Thabo Mbele and painted by Wiseman Ndlovu, who visited the USA on a demonstration tour in 2016. Here he is with our Director, Louise Irvine, giving a master-class at Ocean Reef, Florida.

Come see all the wonderful elephants and rhinos at WMODA and help fight ivory poaching along with Ardmore by supporting the World Wildlife Fund, Save the Rhino and other highly regarded conservation groups. 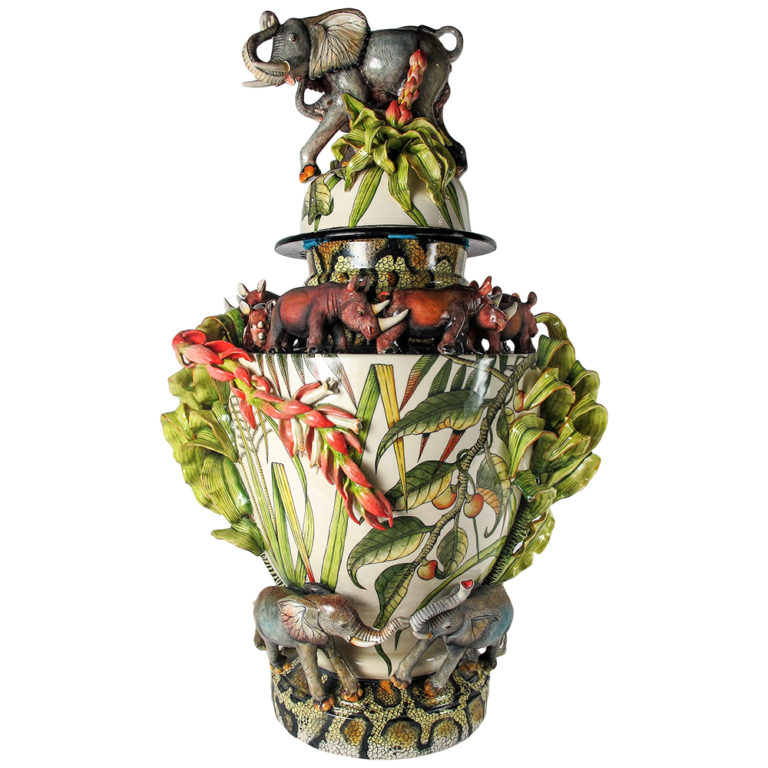 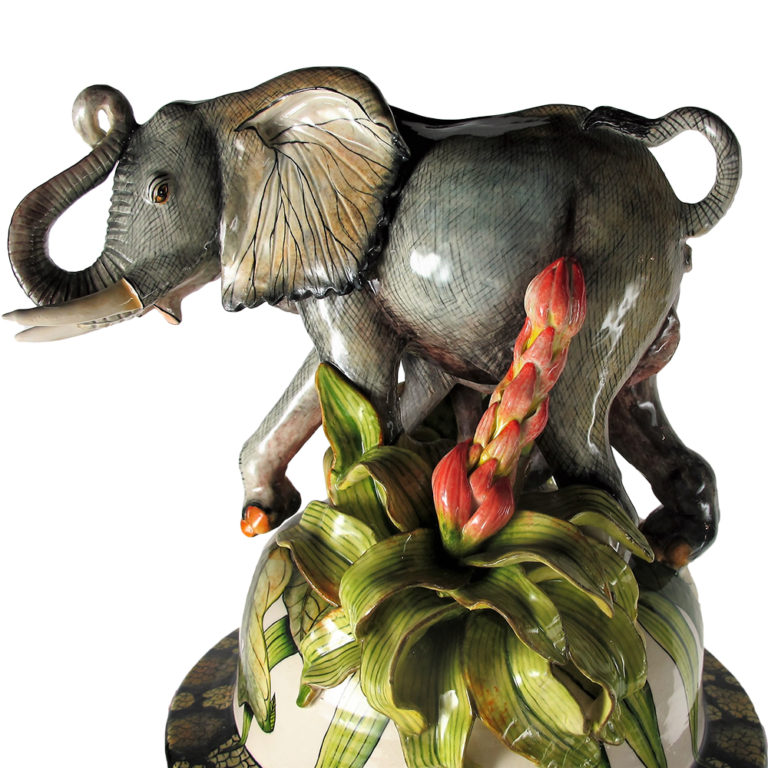 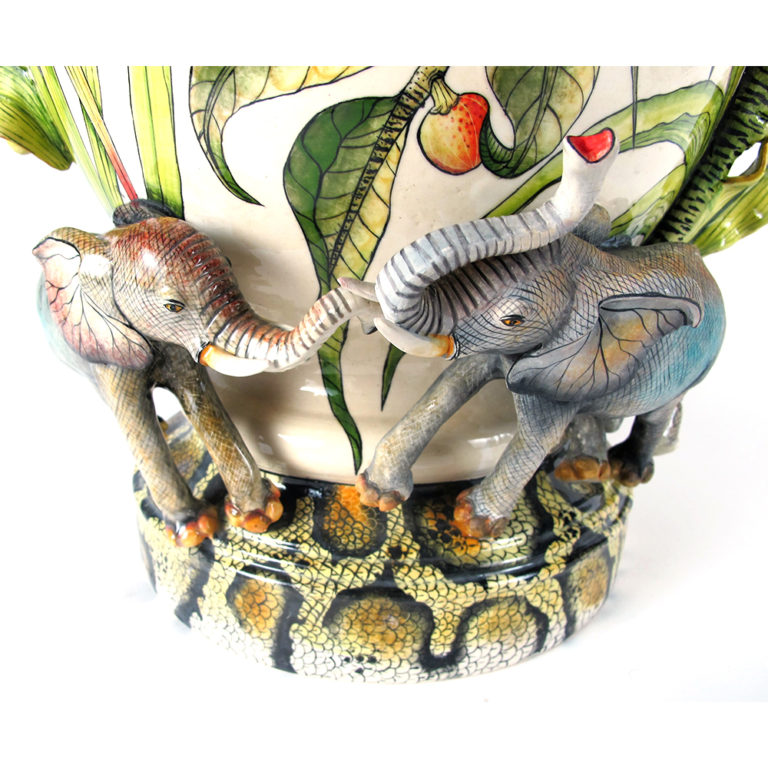 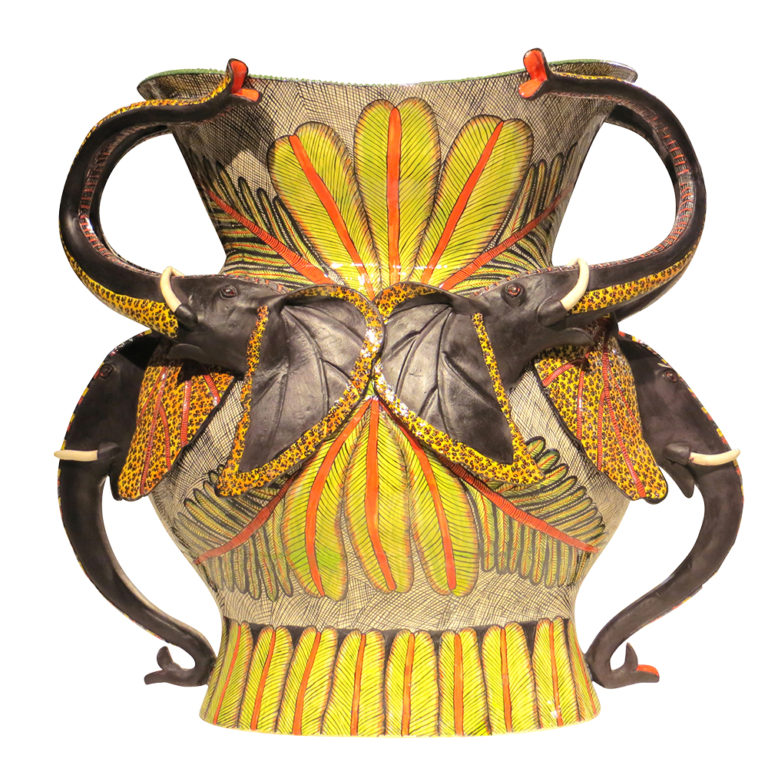 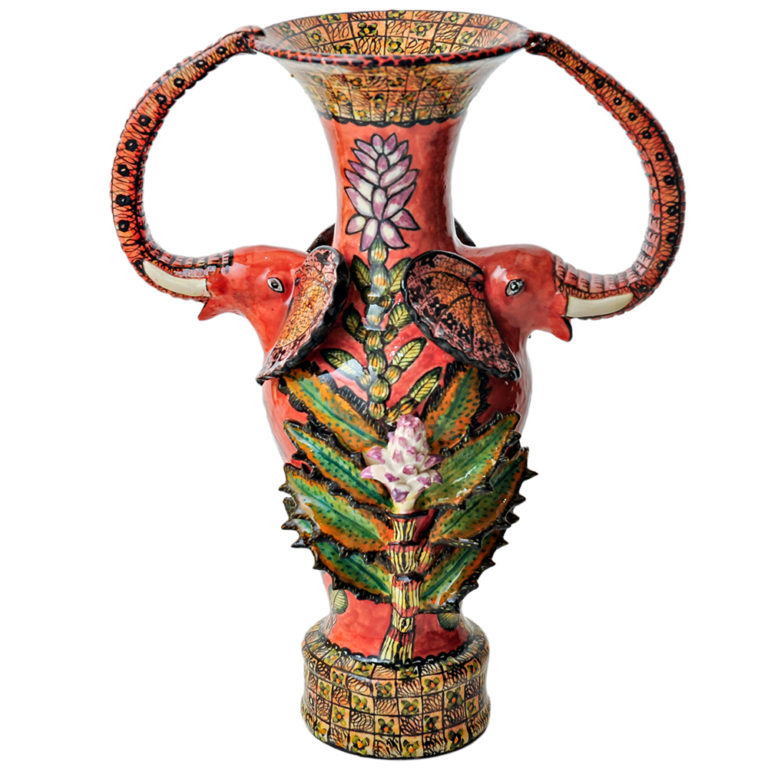 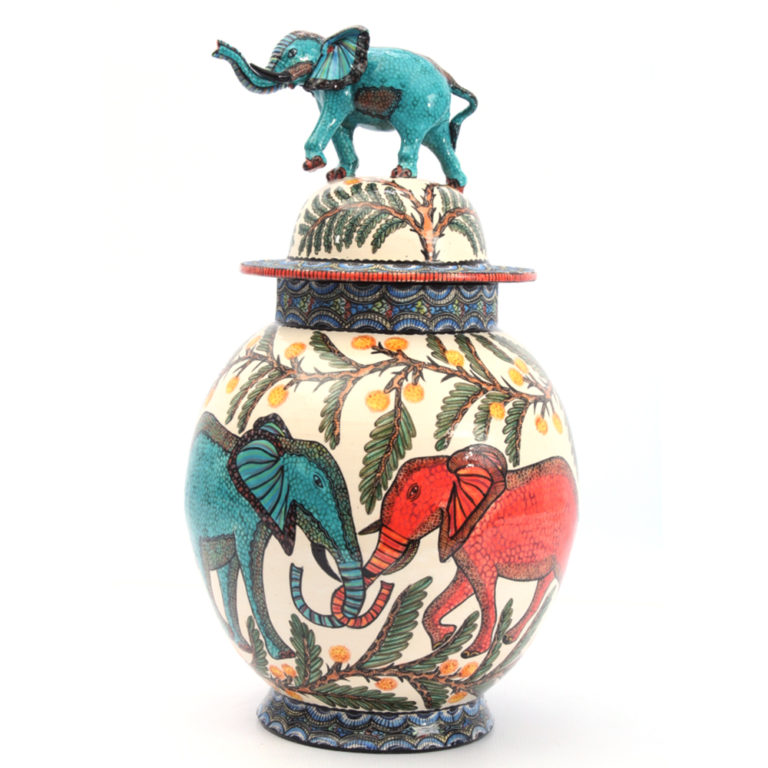 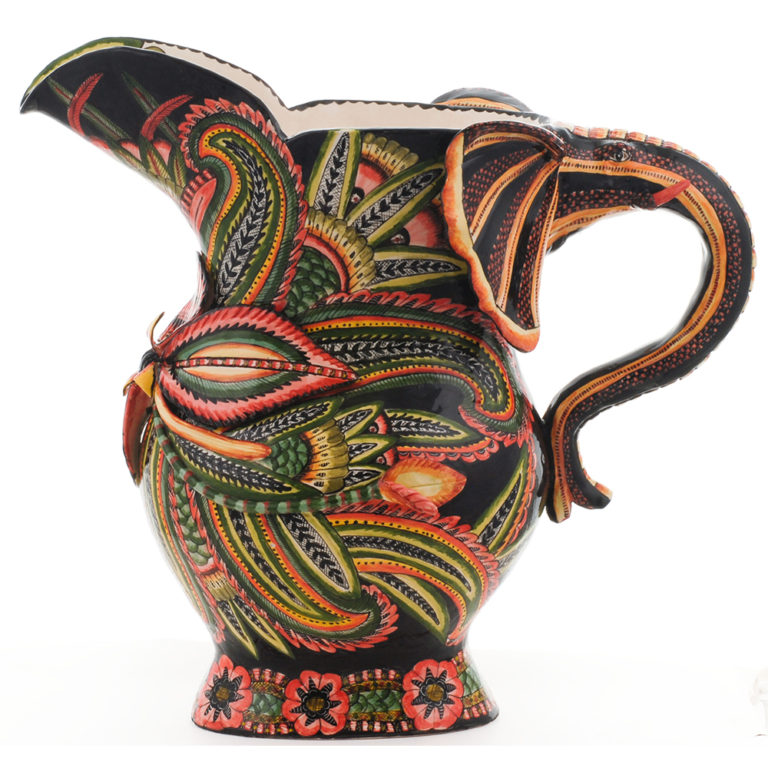 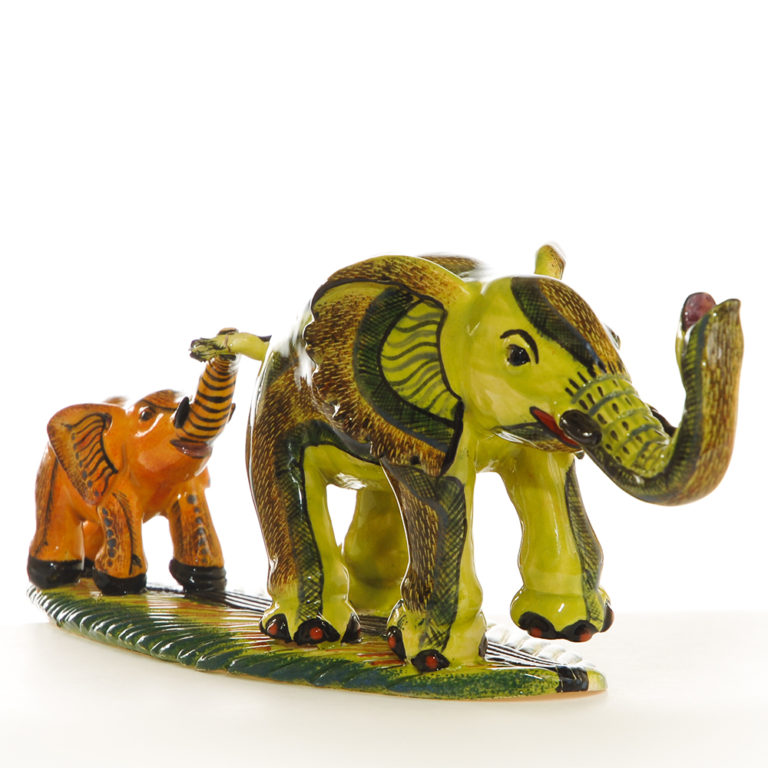 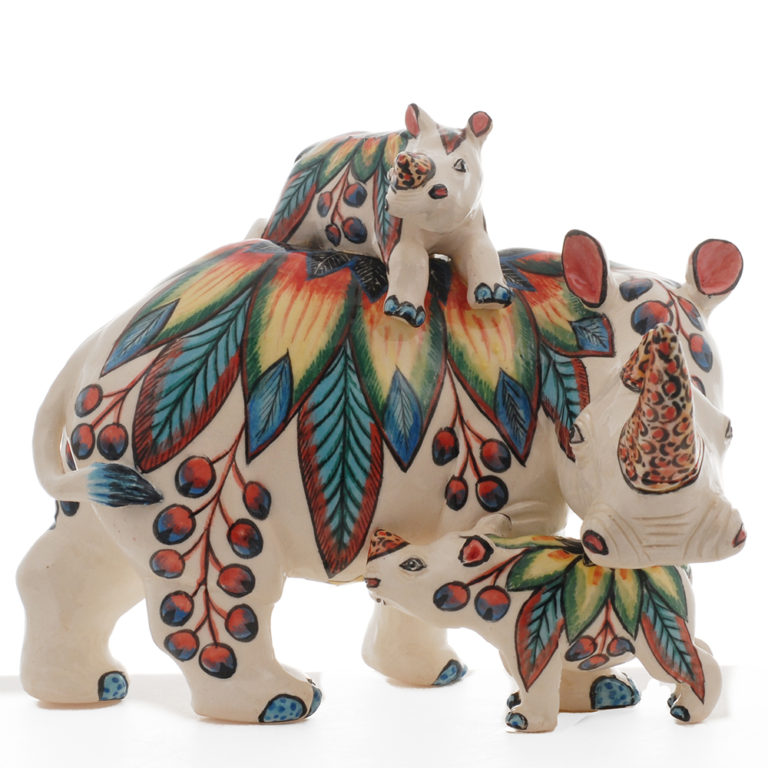 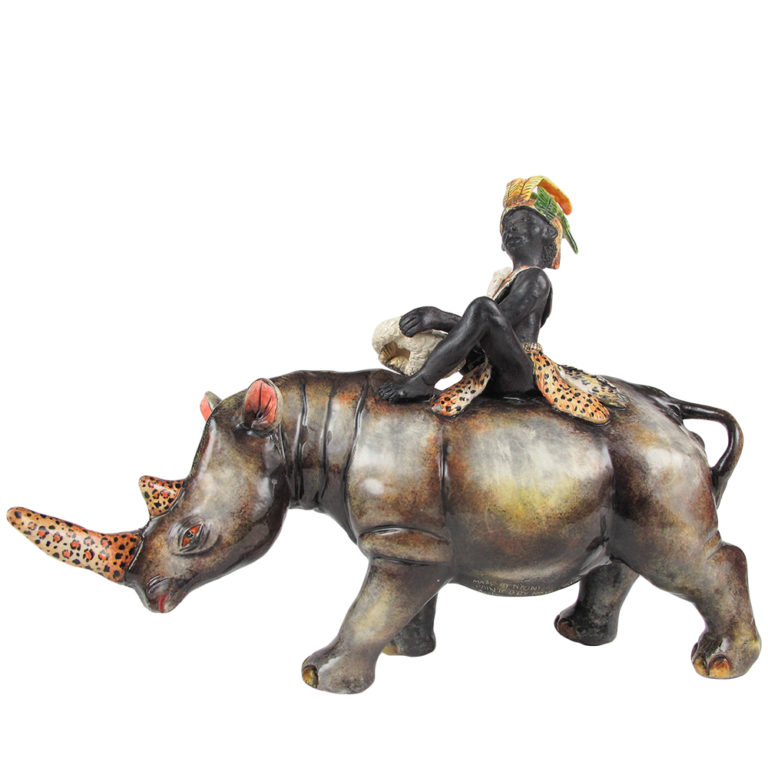 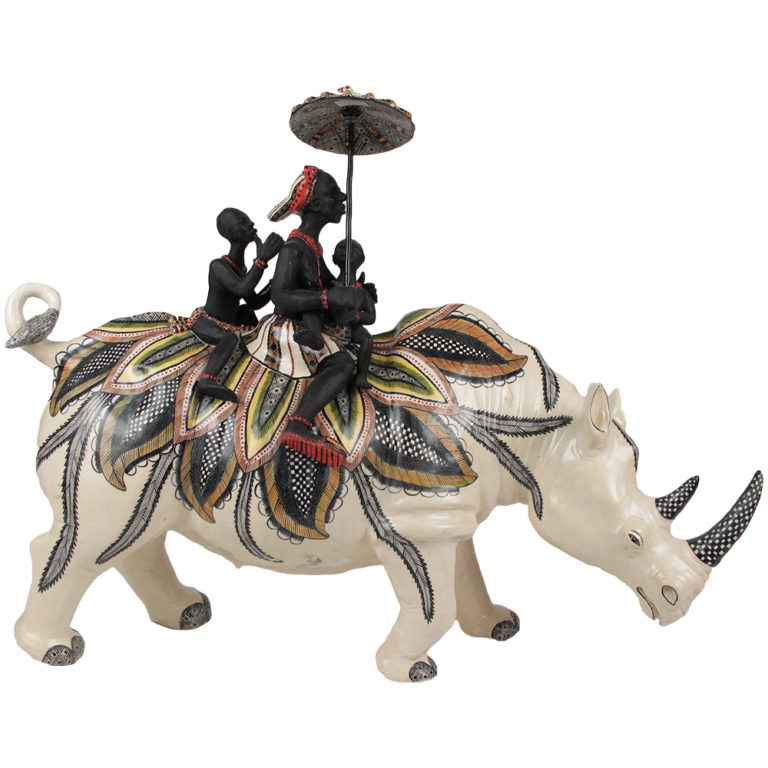 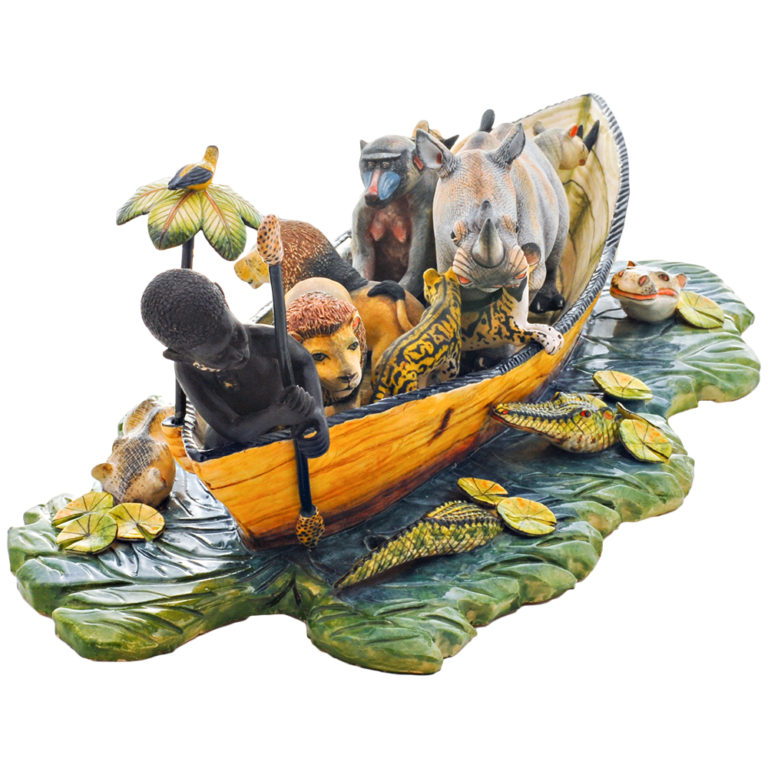 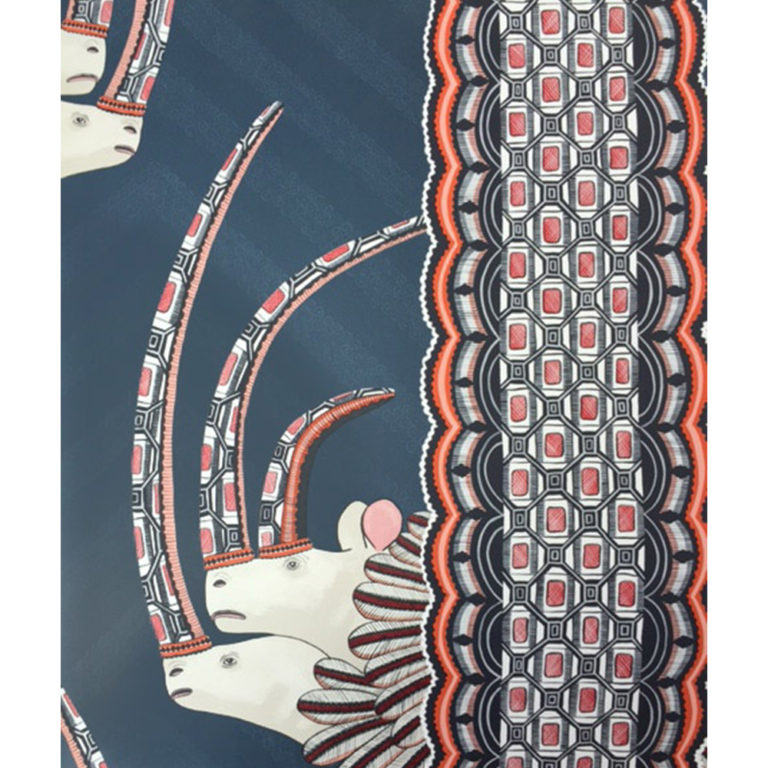 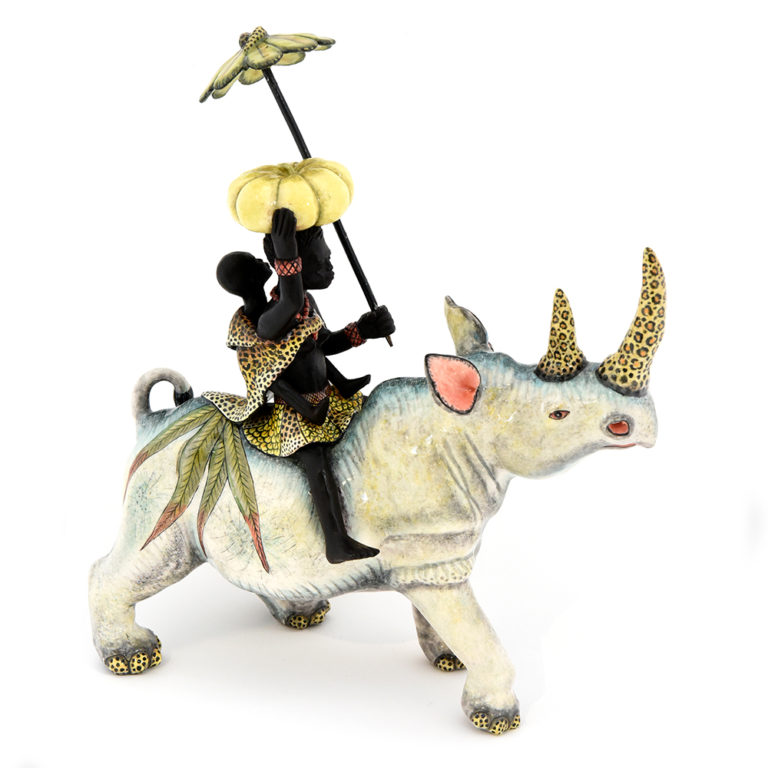 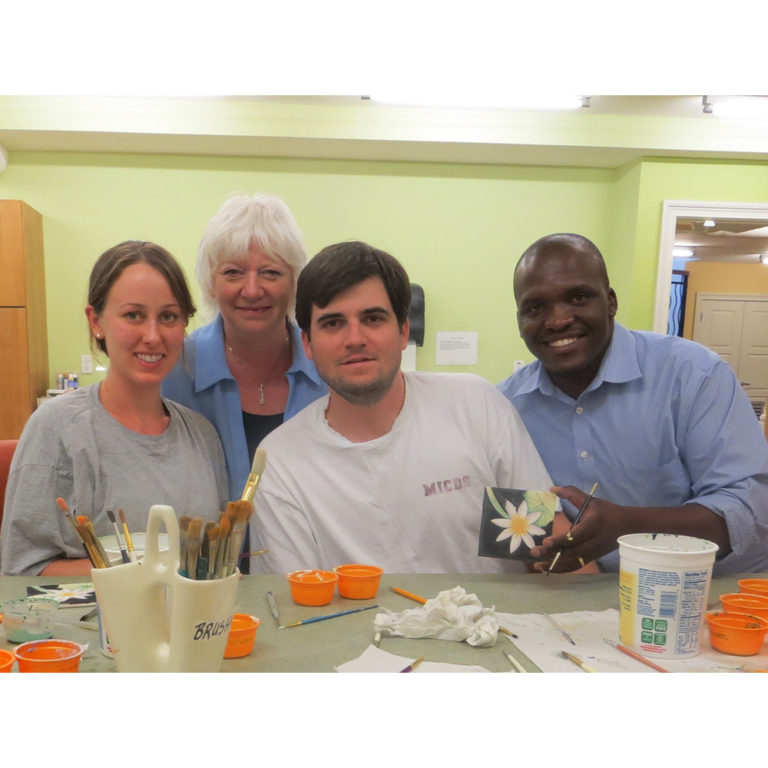 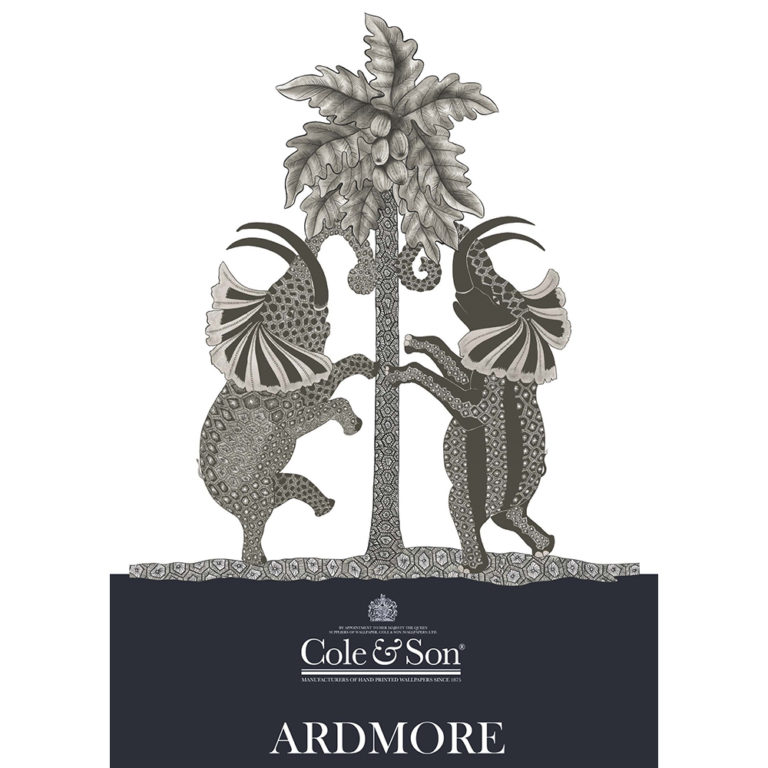 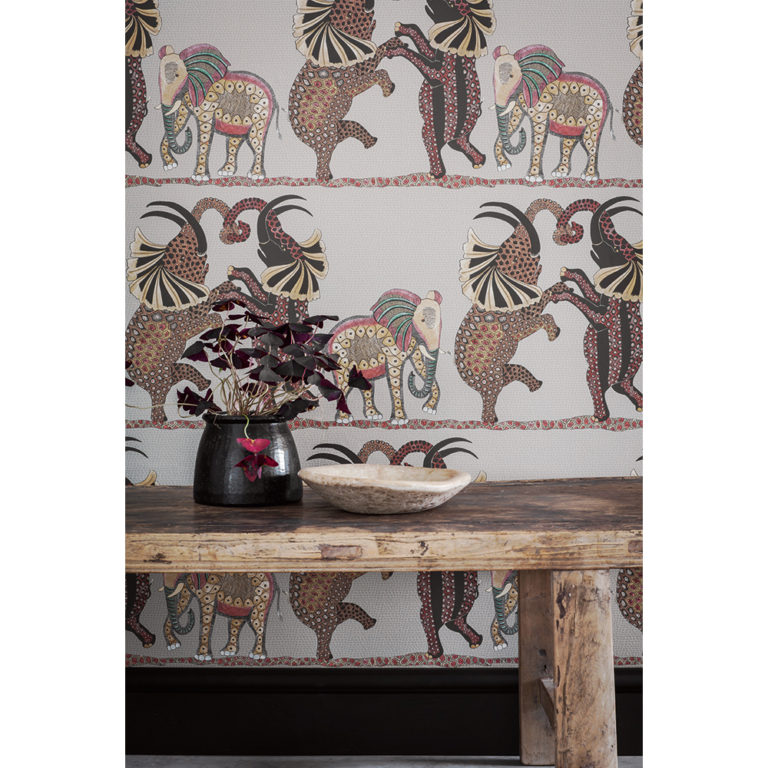 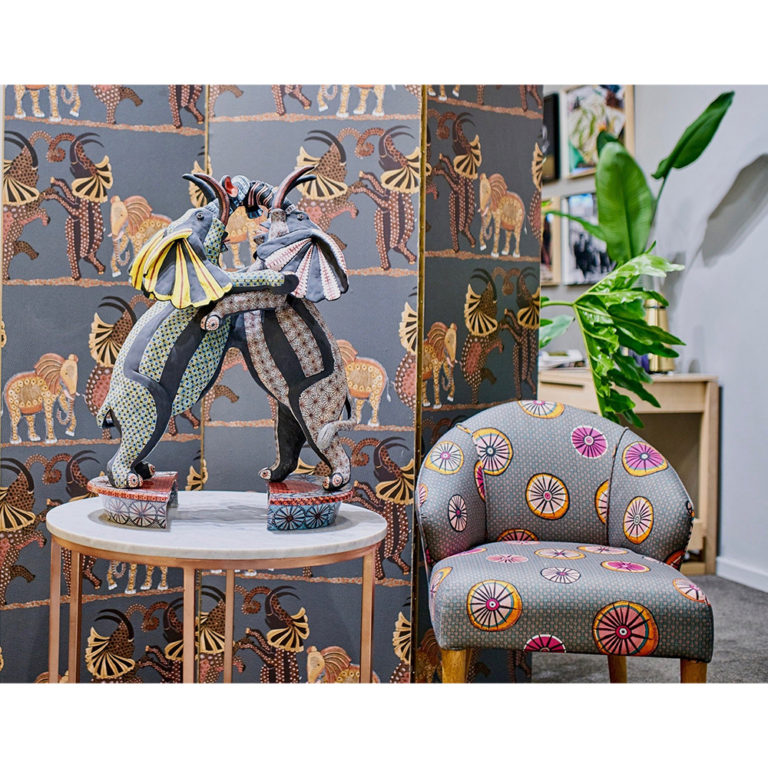 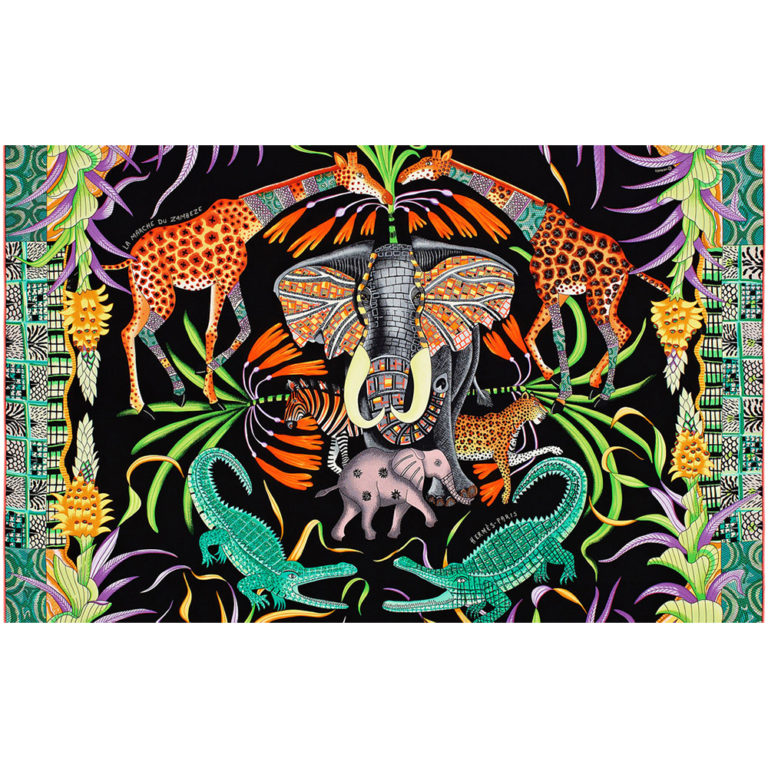 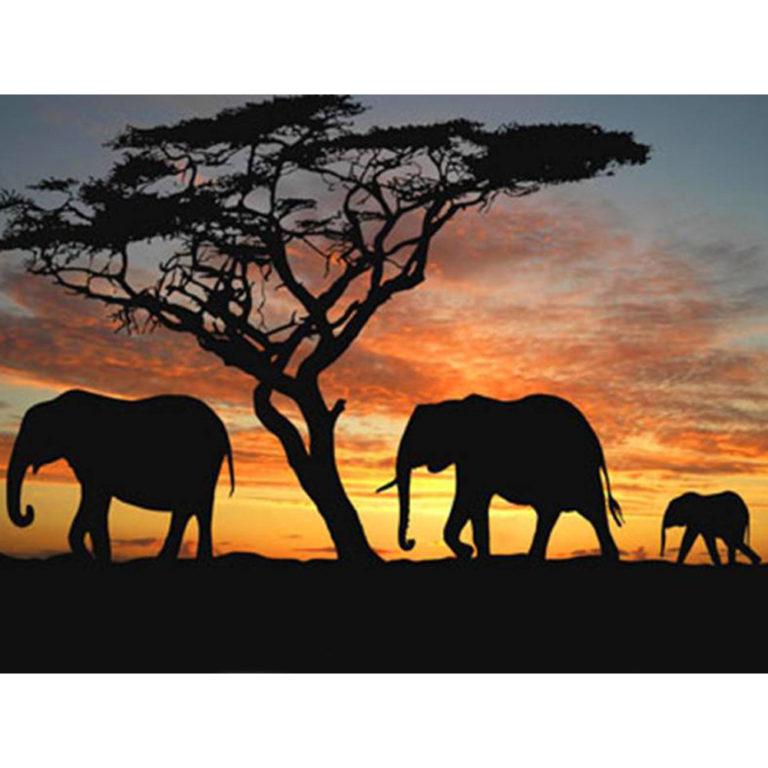 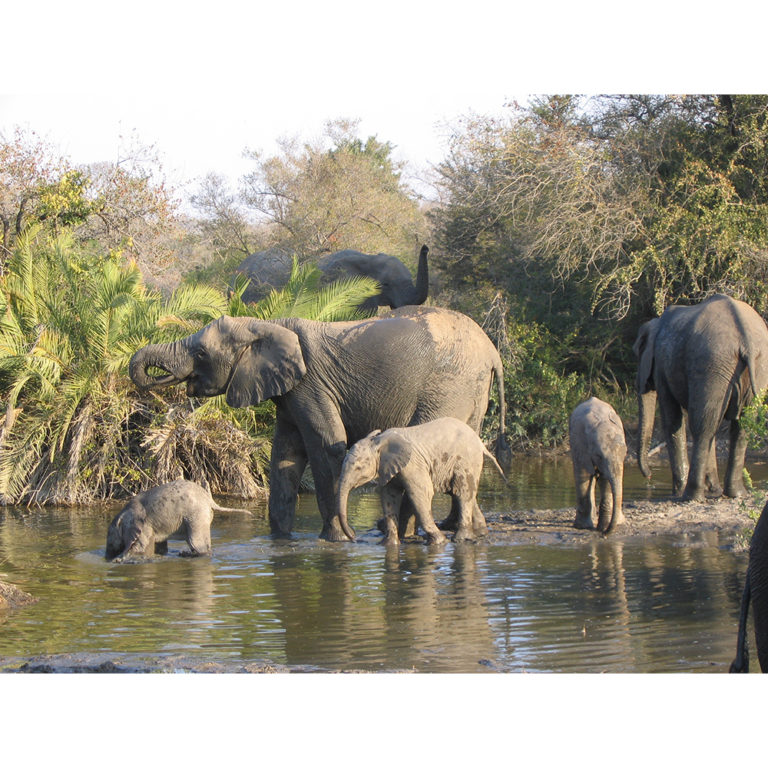 Your ticket for: An Elephant in the Room

An Elephant in the Room