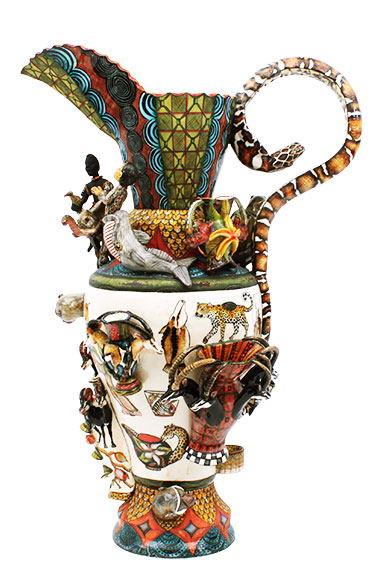 This splendid ewer celebrates 30 years of the Ardmore studio with icons of the artists’ successes and poignant references to the hardships they have endured, notably HIV/AIDS. It was sculpted by Sfiso Mvelase, who communicates about AIDS symbolically and satirically through his works. The design includes many memories of major Ardmore works which now reside in museums and private collections around the world.

The snake handle was chosen by Sfiso to represent Ardmore’s winding and arduous journey from their original location in the Drakensberg mountains to their current studio in the Caversham valley.

The story begins in 1985 when Fée Halsted, a young art school graduate, moved to the Ardmore farm and began collaborating with Bonnie Ntshalintshali, a young polio victim who was not able to able to work in the fields.

Bonnie drew inspiration from her Christian upbringing and Zulu traditions, influenced by Fee’s understanding of ceramics and Western art history. Together, they won the prestigious Standard Bank Award in 1990 which is represented by Bonnie’s sculpture of Jonah and the Whale. In 1999, at the age of 32, Bonnie died of HIV/AIDS and is commemorated by the Bonnie Ntshalintshali Museum of Ardmore, the first museum in South Africa dedicated to a black female artist.

During the 1990s, more than 30 Ardmore artists died of AIDS, including Wonderboy Nxumalo, one of the stars of the studio. The engaging works of this gentle artist conveyed his hope for a better life for the South African people. His simple but inspirational words are recorded in the poetic inscriptions on his pieces. He used animals as metaphors for human behavior and his monkeys pray and play soccer. Many of his later works are imbued with the tragedy of HIV/AIDS from which he died in 2008.

One of the most moving images on the ewer is Ardmore’s most respected and beloved artist, Punch Shabalala, being carried home from hospital close to death from HIV/AIDS. However, she has made a remarkable recovery thanks to the antiretroviral drugs that Fée Halsted has worked tirelessly to provide for the afflicted artists. This access to medication and a new hospital, together with frank education on what is still a taboo subject in many parts of South Africa, has resulted in no more AIDS related deaths at Ardmore.

Your ticket for: Ardmore Commemorative Ewer