It’s Carnival time with beads and balloons in abundance at parties and parades. But did you know that the Royal Doulton figure makers had to pierce a hole in each one of the balloons on their iconic balloon figures to prevent the figures exploding in the kiln?

The balloons in all Doulton’s character figures are cast separately in molds and assembled piece by piece. Before the balloons are bunched together, each one is pierced to permit the air trapped inside to escape. Otherwise, the figure would expand and shatter as it passes through the kiln at temperatures around 1300 degrees Celsius. The Doulton figure makers must be the only people to burst balloons in order to keep them intact!

An old balloon seller features in the movie Mary Poppins Returns, when everyone soars up into the sky with their chosen balloon. Angela Lansbury’s cameo appearance at the remarkable age of 93 is perfect as the old balloon seller in the park. She is first seen early in the movie when the Banks children are going to buy groceries and they don’t have enough money to buy a balloon for Georgie. At the end of the movie, when Michael Banks’ loan has been cleared, the family go to the funfair in the park to celebrate. This time Georgie gets his balloon and as Ms. Lansbury sings the finale number Nowhere to go but up, he ascends into the air followed by all the good characters in the plot who have picked their own perfect balloon.  I won’t spoil the ending by telling you who goes down like a lead balloon.

The new movie was inspired by the sequel book by P.L. Travers Mary Poppins Comes Back, which was published in 1935. One of the stories in the sequel features a balloon seller and the Banks children spend a breathless afternoon in the park dangling from balloons. The original book illustrator, Mary Shepard, visualized the character who might well have been based on the Old Balloon Seller figure modeled by Leslie Harradine for Royal Doulton in 1929. Many of the props in the eight-book series of Mary Poppins stories were based on actual items from the author’s childhood in Australia. As a baby, she was given a Royal Doulton bowl depicting three children playing horses from the Pastimes series. The bowl is illustrated in the original Mary Poppins book and has inspired an amazing fantasy episode in the new movie.

P.L. Travers was not the first celebrated author to immortalize the old balloon seller. J. M. Barrie in his classic tale of Peter Pan in Kensington Gardens, published in 1907 writes: “…before you go in you speak to the lady with the balloons, who sits just outside. This is as near to being inside as she may venture, because, if she were to let go her hold of the railings for one moment, the balloons would lift her up, and she would be flown away. She sits very squat, for the balloons are always tugging at her, and the strain has given her quite a red face. Once she was a new one, because the old one had let go, and David was very sorry for the old one, but as she did let go, he wished he had been there to see…”

In Arthur Rackham’s illustration for the first edition of Barrie’s book, the startled balloon seller is floating upwards having let go of the railings. This illustration seems to have caught the imagination of Leslie Harradine as his figure of Biddy Penny Farthing HN1843 from 1938 is very similar.  Biddy is typical of the itinerant peddlers who sold balloons, flowers and other trifles on high days and holidays. Collectors may have heard of the prototype version of Biddy without her balloons, which first appeared on the market in the early 1980s.

The Balloon Seller HN479, introduced in 1921, was the first of Harradine’s hardy characters who plied their trade on the streets of London and other major cities. Her sleeping babe is nestled among the balloons to tug at the customer’s heartstrings.  Her popularity was such that she was produced in five different color variations and remained in production until 1949. There is also a miniature version dating from 1989.

However, Royal Doulton’s most iconic vendor is the Old Balloon Seller which dates back to 1929. It appears that Harradine was inspired by an illustration entitled Silken Bubbles by Francis H. Warren for Pan magazine.  The seated balloon seller has made several appearances over the years, including two very rare figures of her with a bulldog, colorways, a miniature figure, two teapots, a relief modeled plate and a Bunnykins tribute.  There was even a clay model made for a character jug but it did not reach production. The Old Balloon Seller had a makeover for her 70th birthday and most of her anniversary year was spent traveling the world with Michael Doulton for his signing events.

Harradine was not alone in his fascination with these bohemian characters from the streets of London. Studio potter, Charles Vyse, who began his career at Doulton, also frequented street markets and fairs, portraying the gypsies, swag sellers and flower girls. Harradine must have been familiar with Vyse’s Balloon Woman and Tulip Woman of 1920 as his Balloon Seller is a hybrid of the two models. Apparently, Vyse was not amused by what he considered to be blatant plagiarism by Royal Doulton.

Balloons have a surprisingly long history. Long before the invention of rubber, animal bladders were inflated and manipulated into various shapes. The Aztecs were the first people in history to make balloons in this way and they presented them to their gods as a sacrifice. In European countries, during the Middle Ages, jesters and troubadours entertained with balloons made from pig’s bladders. These marottes or baubles, as they were known, were sometimes filled with dried peas so that they rattled as the fool brandished them. Animal parts continued to be blown up into balloons and balls until the early 19th century. In the Swiss Family Robinson, published in 1813, young Jack asks his Papa to make him a balloon from a piece of whale entrails.

The first rubber balloons appear to have been made by Professor Michael Faraday in 1824 for use with his hydrogen experiments. Toy balloons were introduced in the form of a do-it-yourself kit the following year. The prototype of the modern toy balloon dates from 1847 when J.G. Ingram of London produced vulcanized rubber balloons which were unaffected by changes in temperature. By the time Leslie Harradine began modeling balloon sellers in the 1920s, these colorful toys had become a regular feature of markets, fairs, and carnivals.

In addition to his balloon sellers, Harradine also portrayed a reveler from the roaring twenties with her balloons. Folly was produced in earthenware and bone china and reflects the passion for party balloons in the Art Deco era. Dancing with balloons was popularized by the burlesque star Sally Rand at the 1934 Chicago World’s Fair. Following her sensational fan dance the previous year, she decided on a bubble dance. In her words, "I wanted a balloon sixty inches in diameter, which is my height, made of a translucent or transparent material." However, the biggest balloons available were only half that size and so she funded the necessary experimentation herself. Unfortunately, the massive transparent balloons burst at an embarrassing moment. On investigation, it was discovered that a member of the audience was shooting paper clips with a rubber band sling-shot so a silk curtain was installed as a barrier.

Valerie Annand revived the Art Deco figure style with her set of Balloon Clowns in 2008, which also continued the long tradition of jokers with balloons. When rubber became strong and flexible enough, balloon twisting became a popular form of entertainment often performed by circus and carnival clowns. Royal Doulton first considered a clown figure playing with balloons in 1965 but this model by Mary Nicoll did not go into production. Bill Harper’s Balloon Clown was introduced in 1986 to popular acclaim.

Royal Doulton’s balloon sellers were so popular in the 1980s that the leading characters were portrayed on relief modeled plates and new figures were added to the HN collection. Bill Harper contributed Balloon Girl and Peter Gee gave us Balloon Boy and Balloon Lady. There have even been Balloon Seller Bunnykins figures. We’re still waiting for a Balloon Baby to be born but in the meantime, balloon characters are still among the most popular Royal Doulton figures to collect. See many of them in the Carnival & Cabaret exhibition at WMODA. 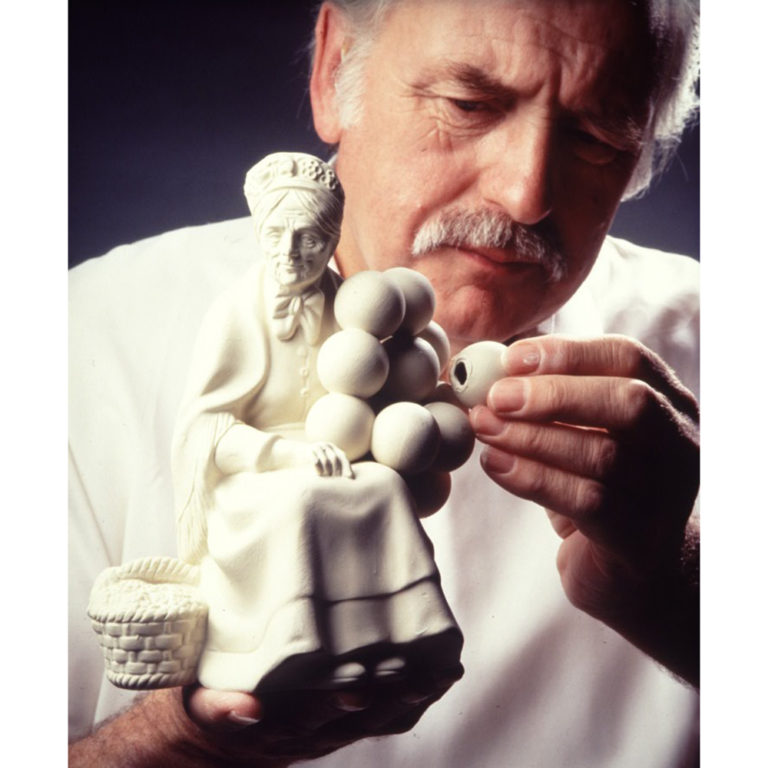 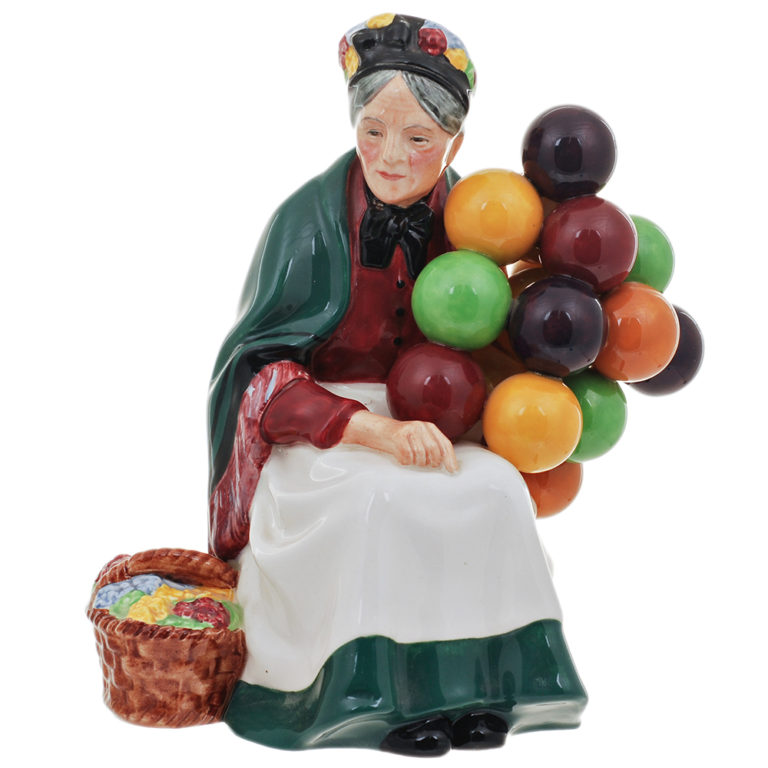 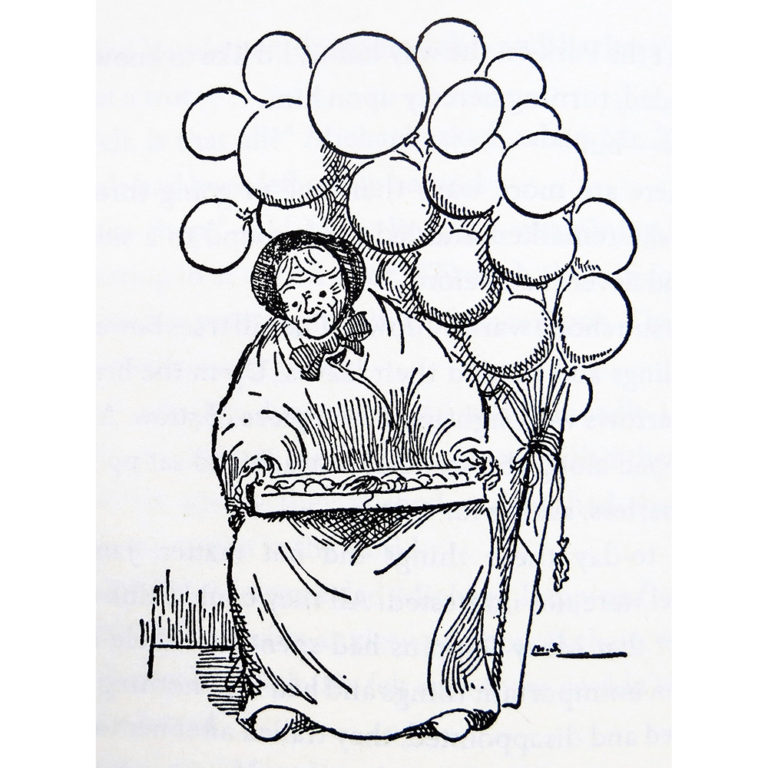 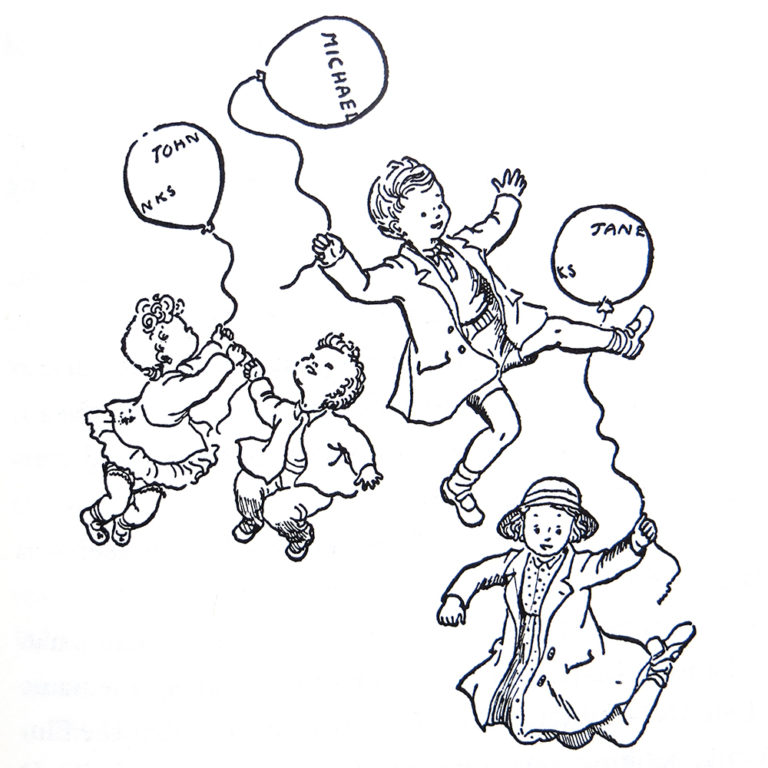 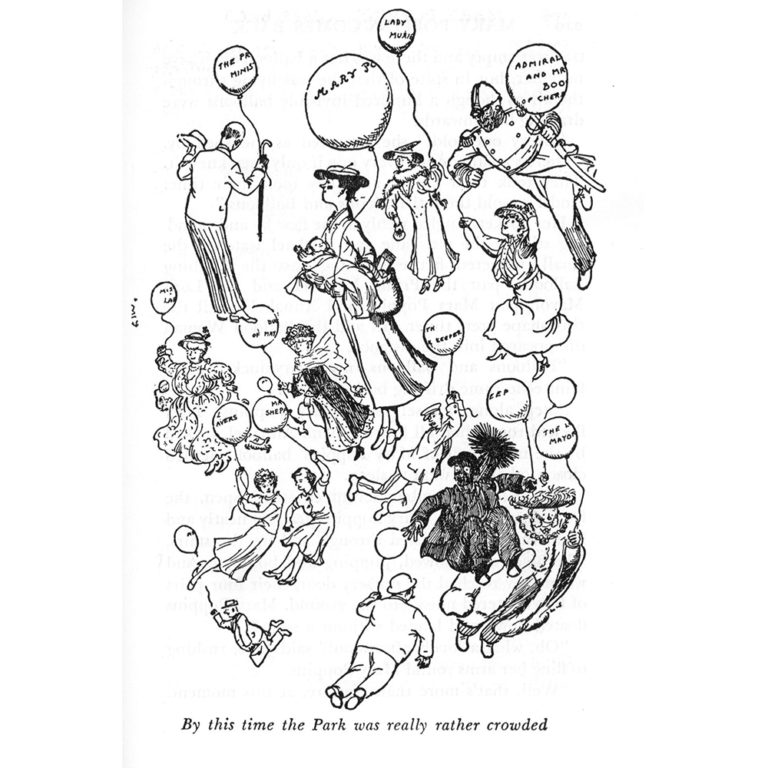 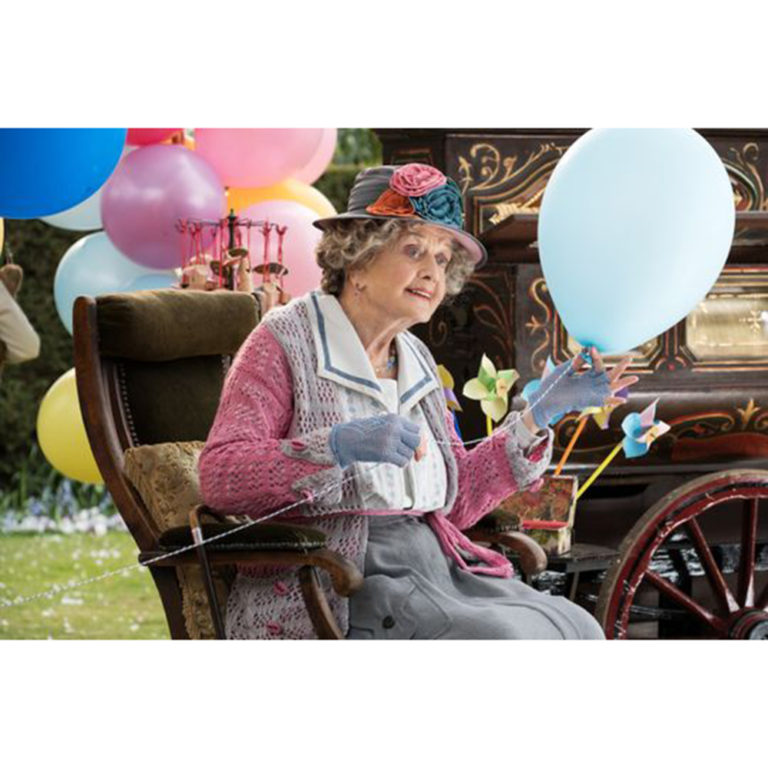 Angela Lansbury as the Balloon Seller 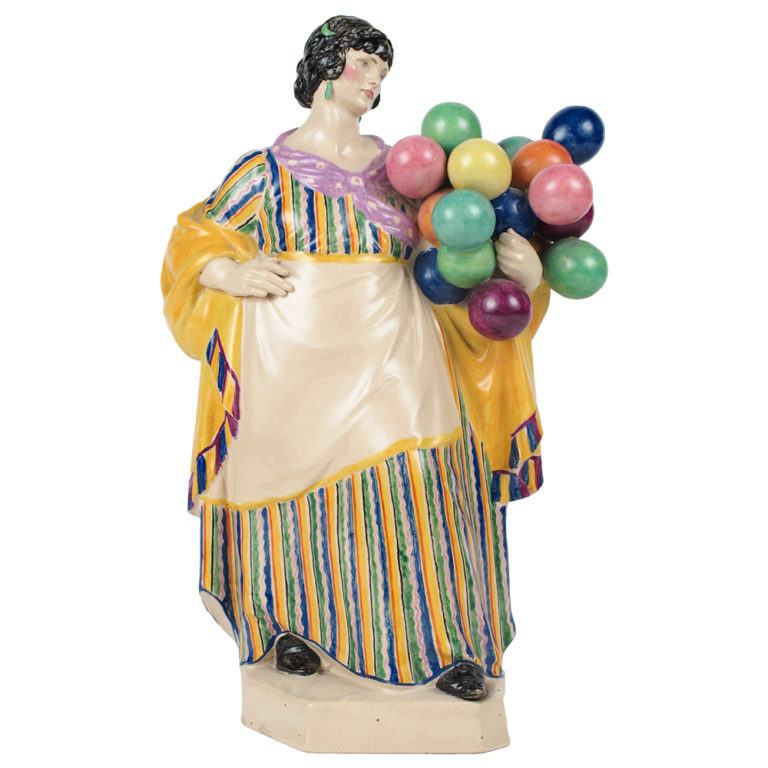 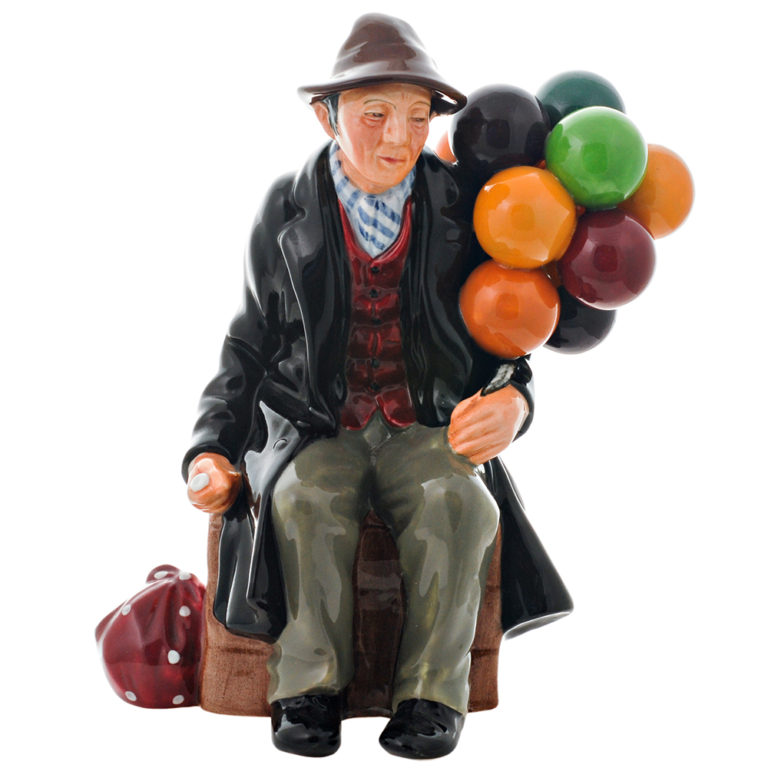 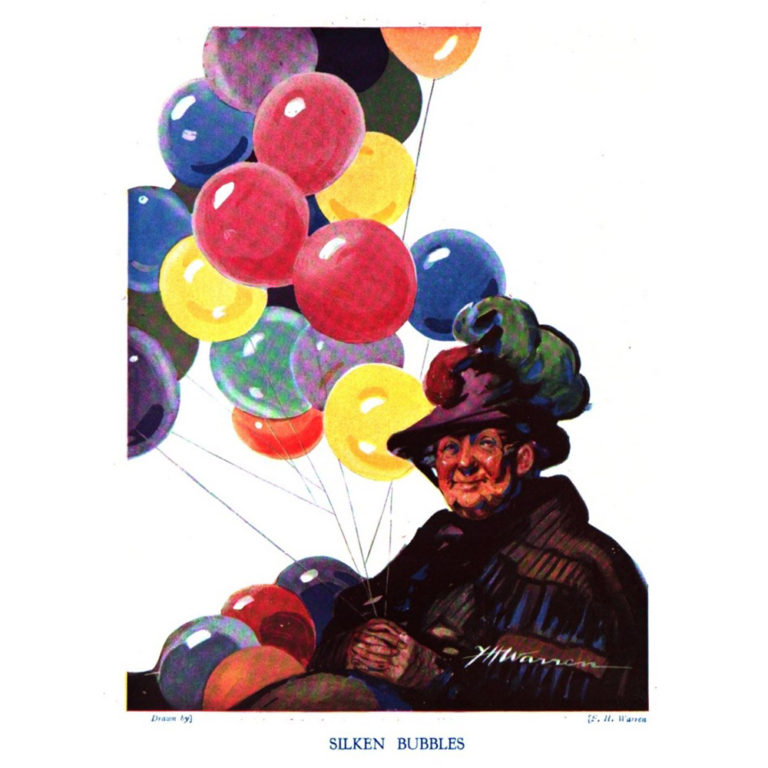 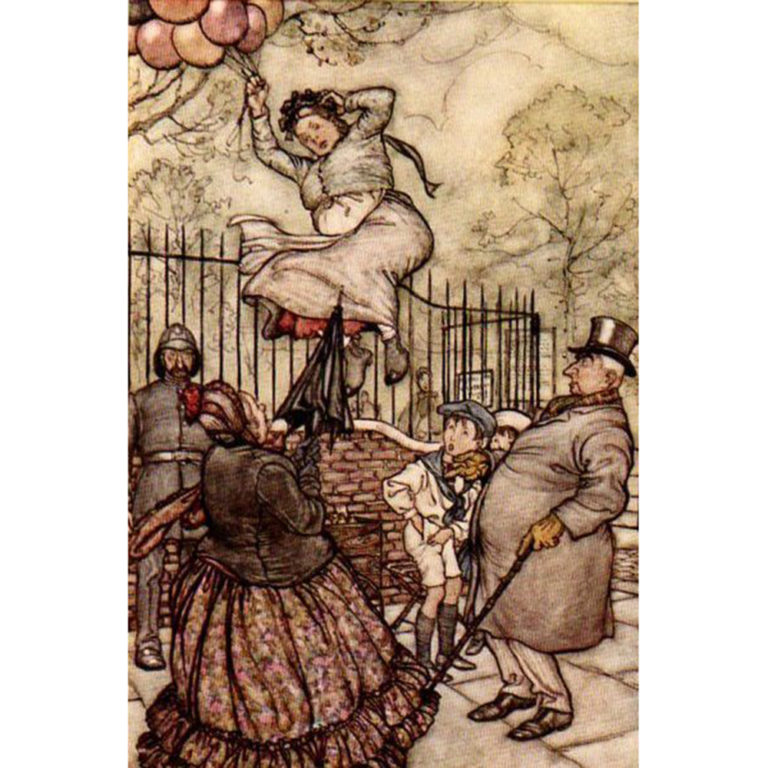 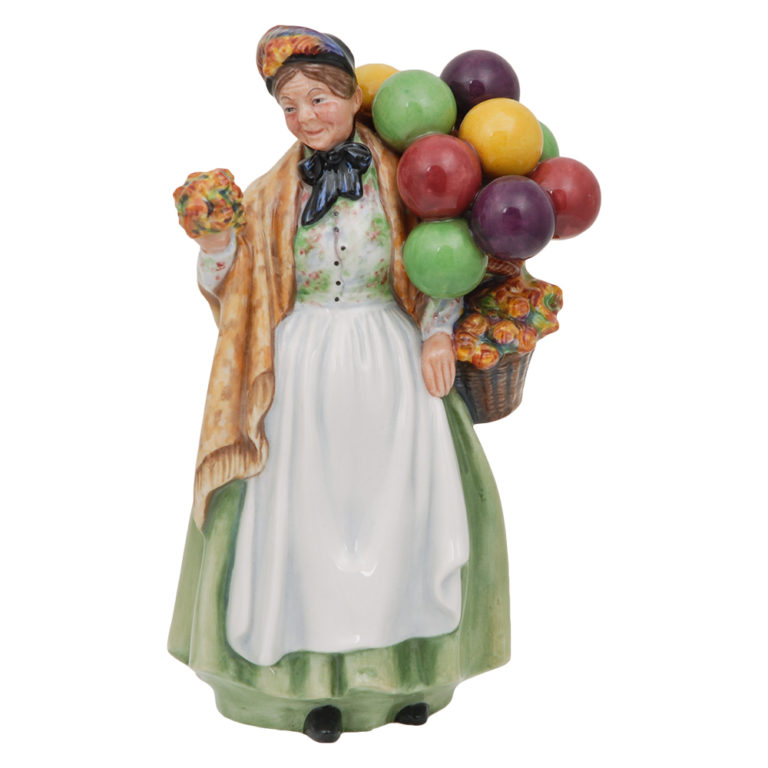 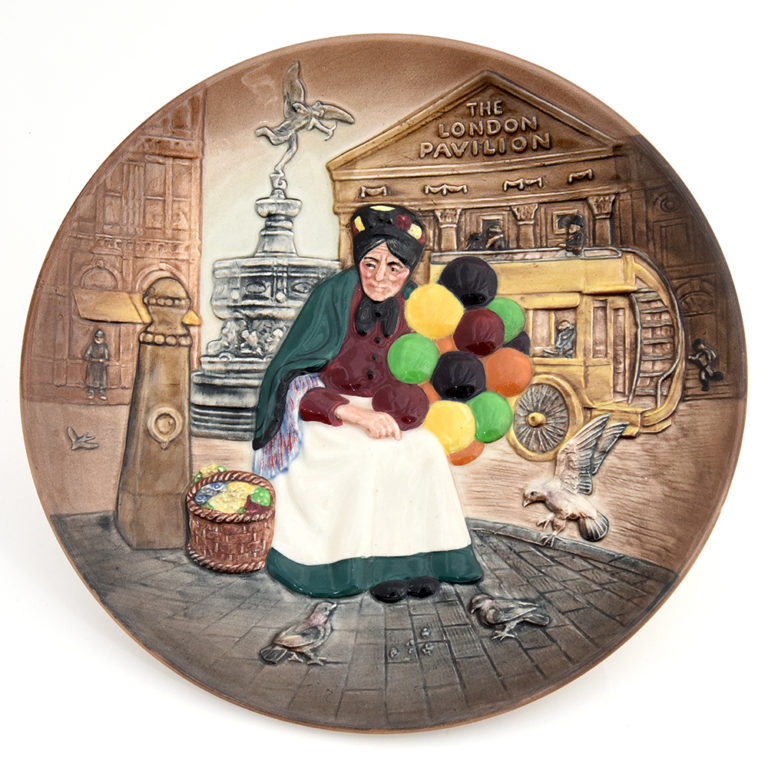 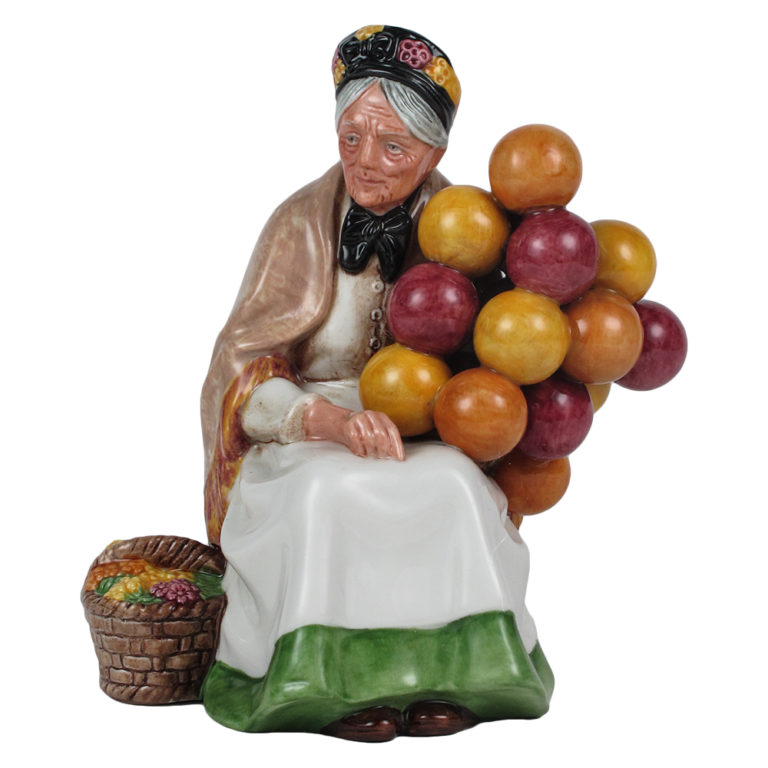 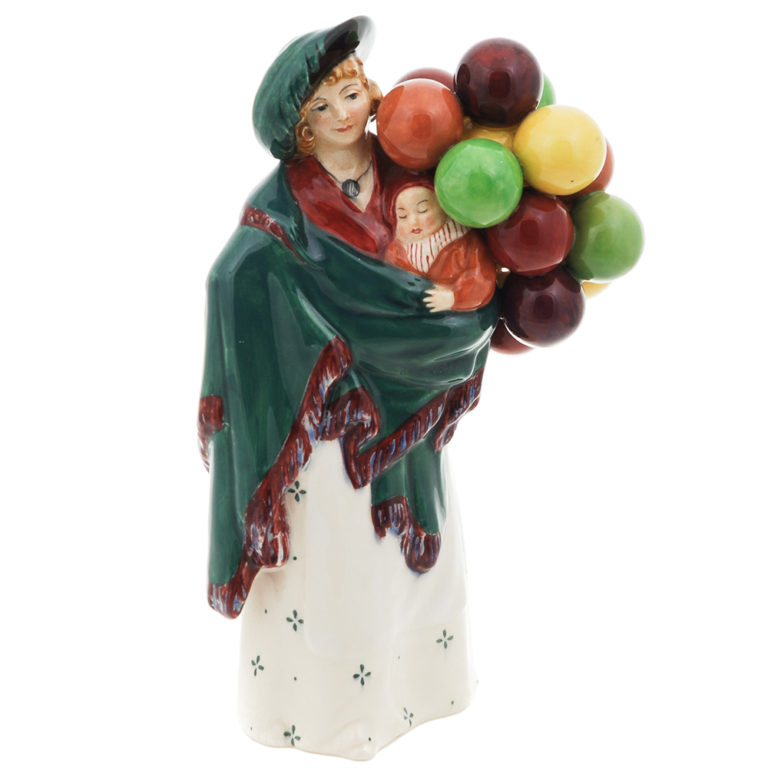 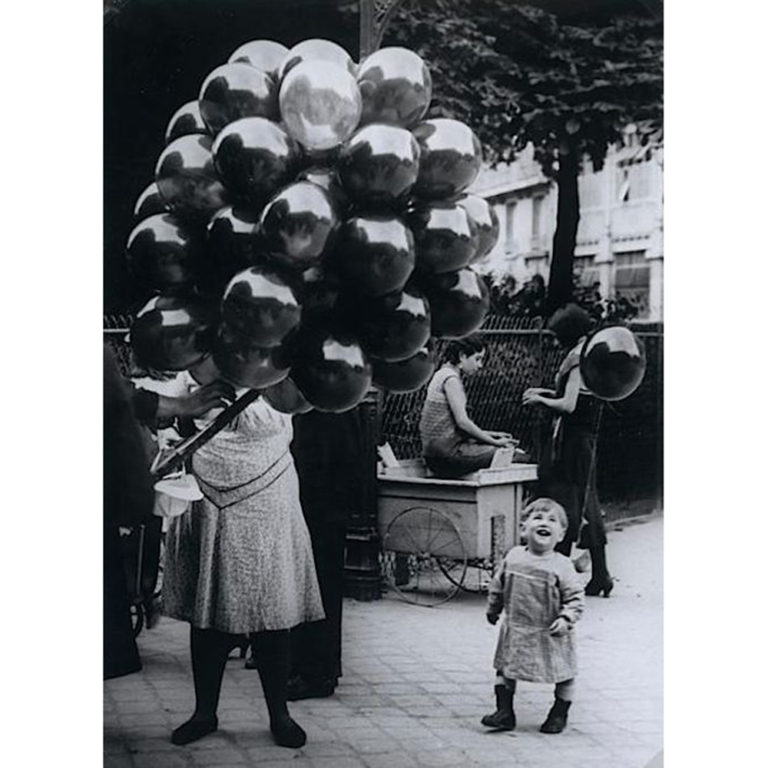 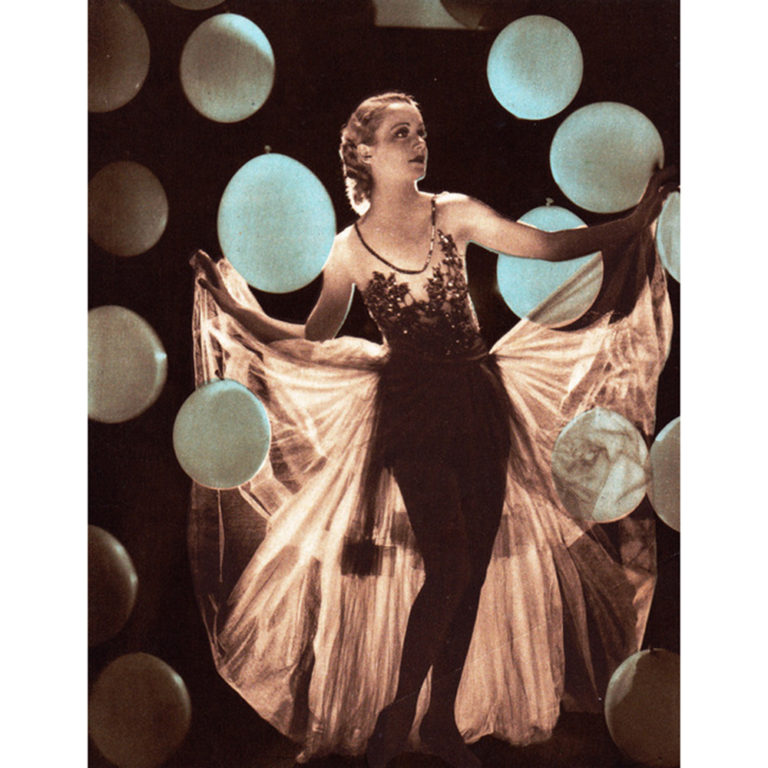 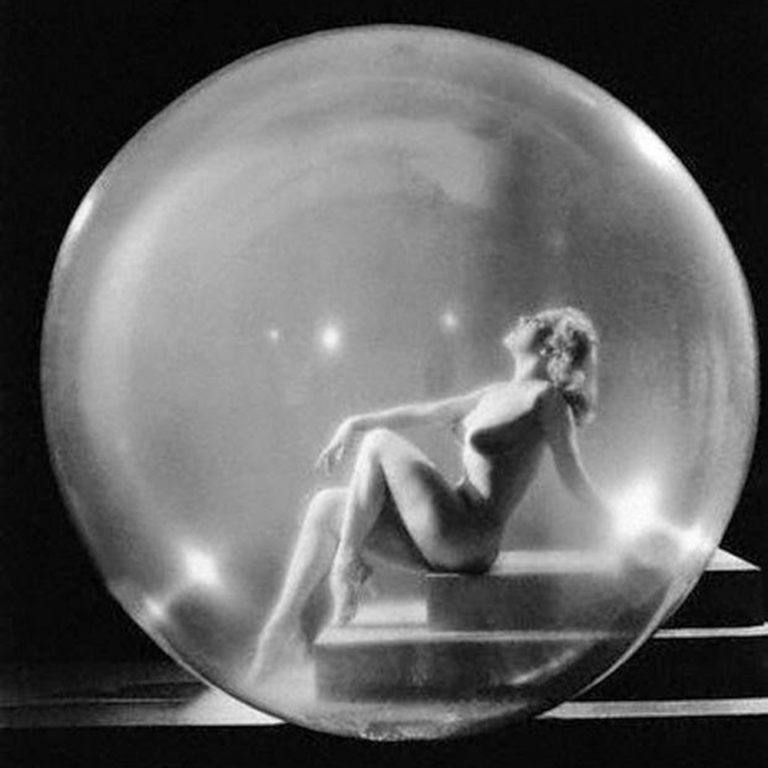 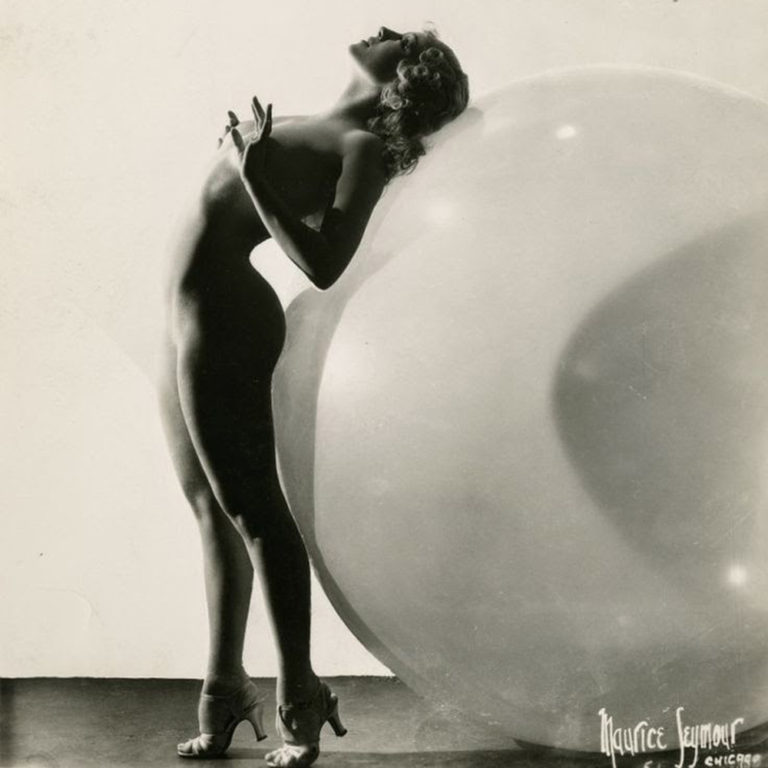 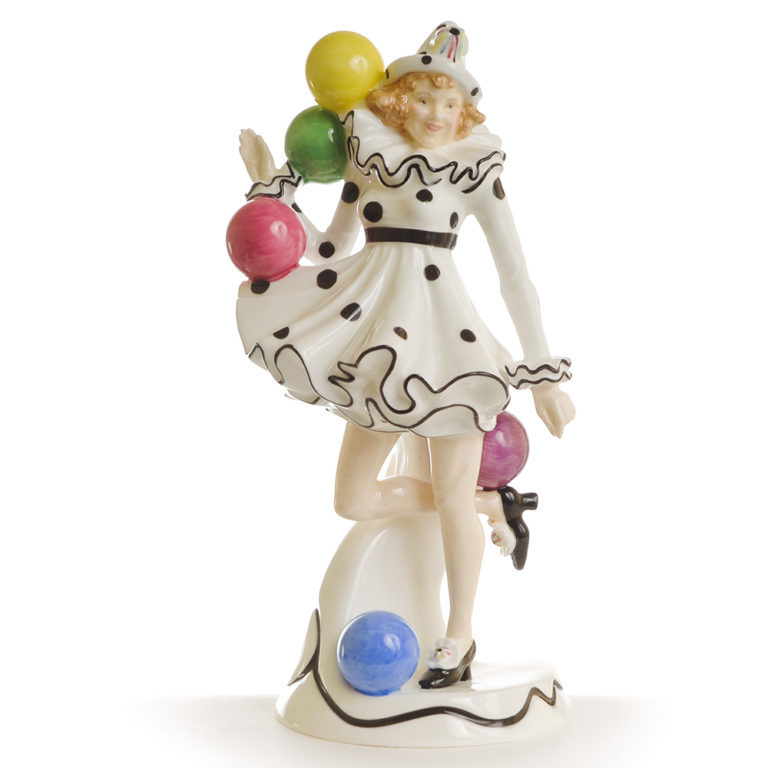 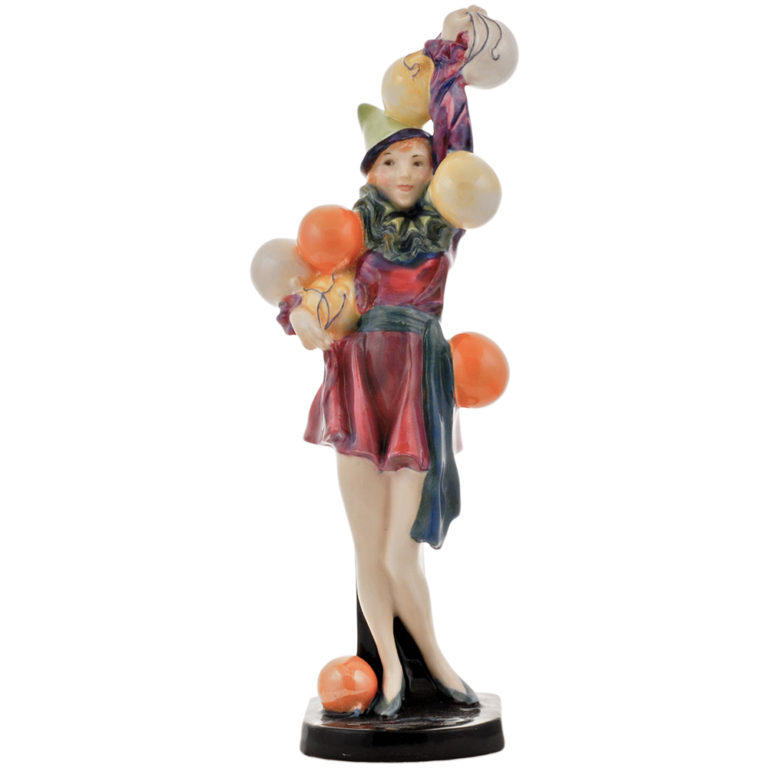 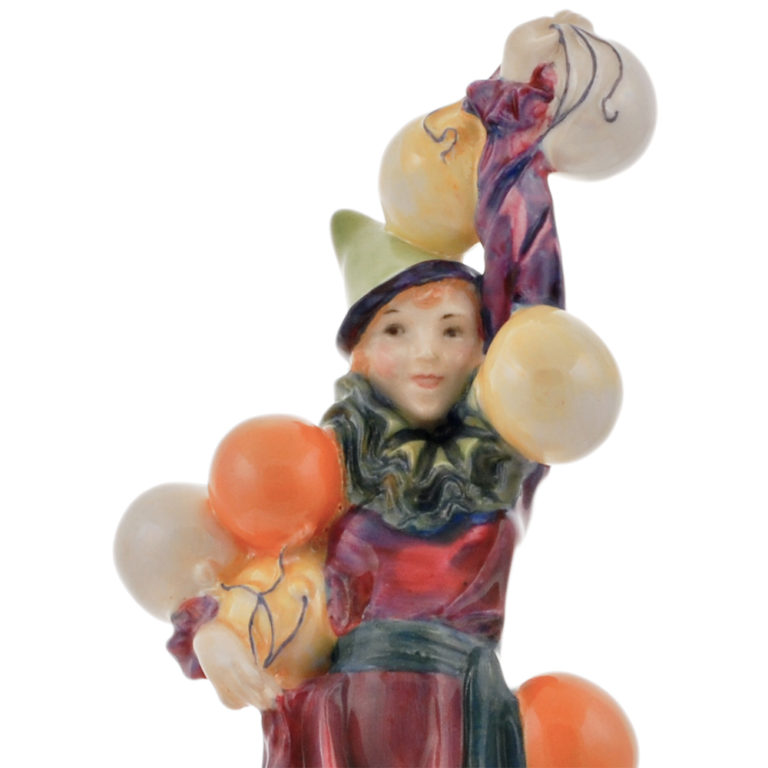 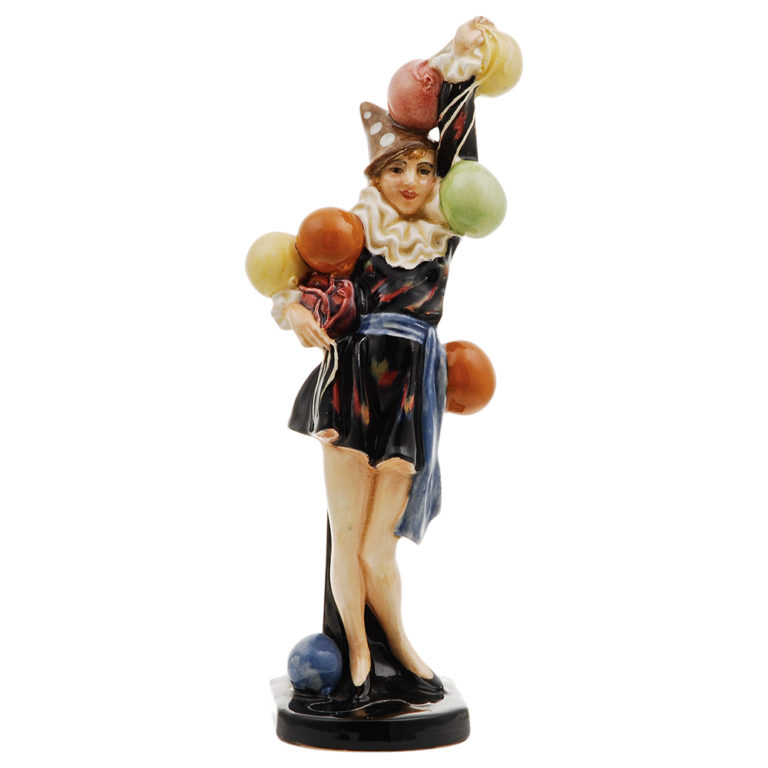 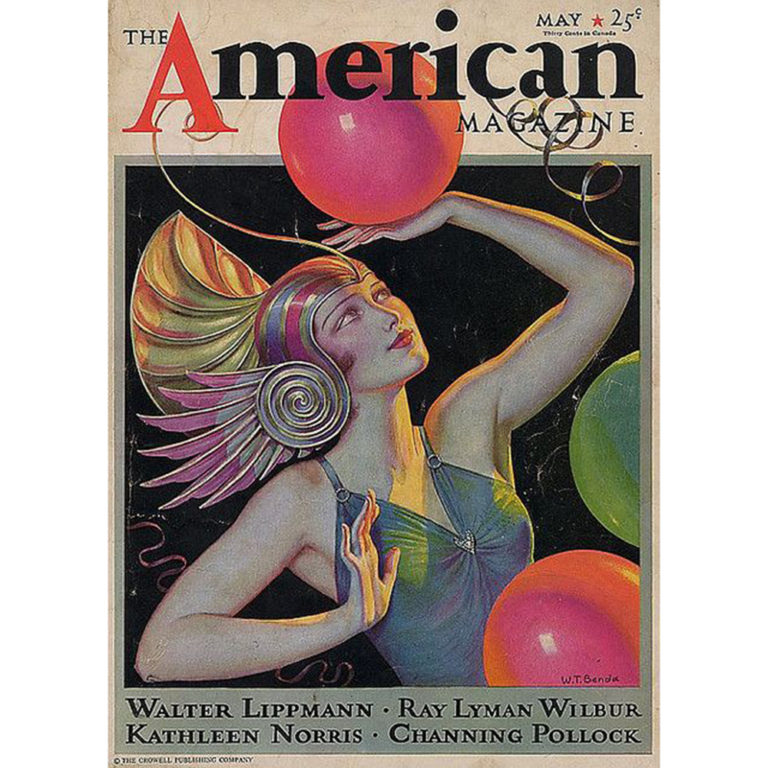 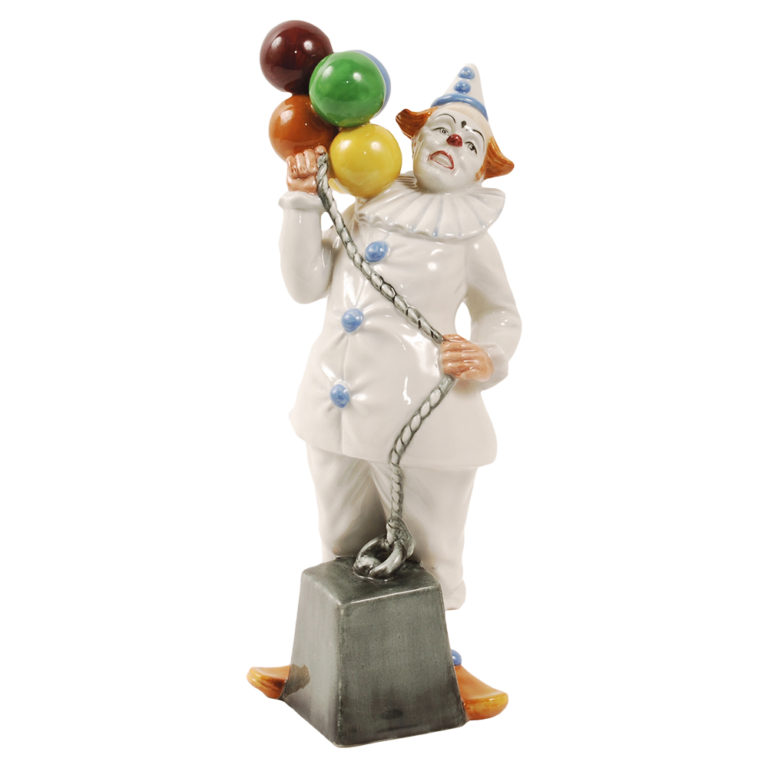 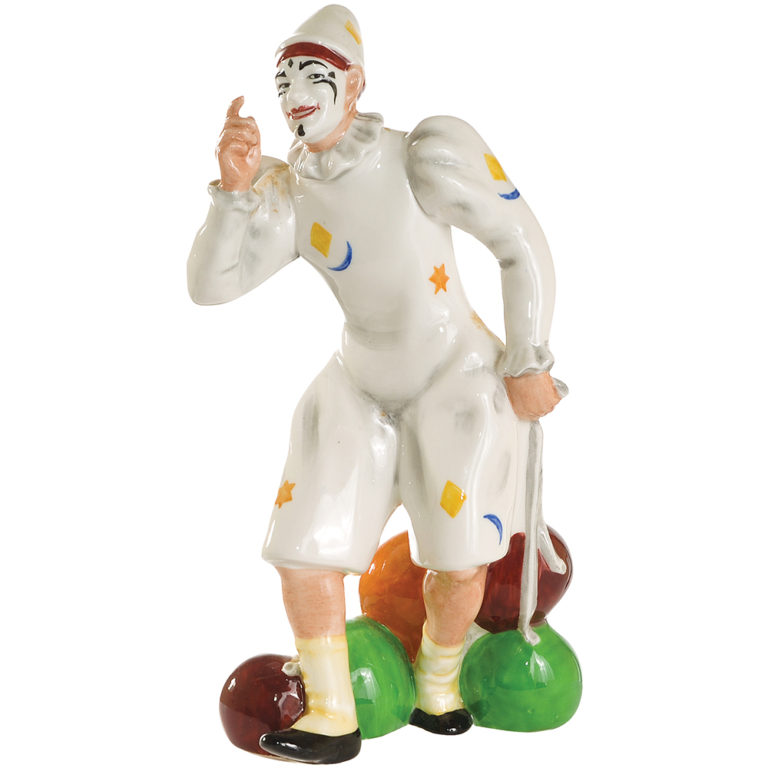 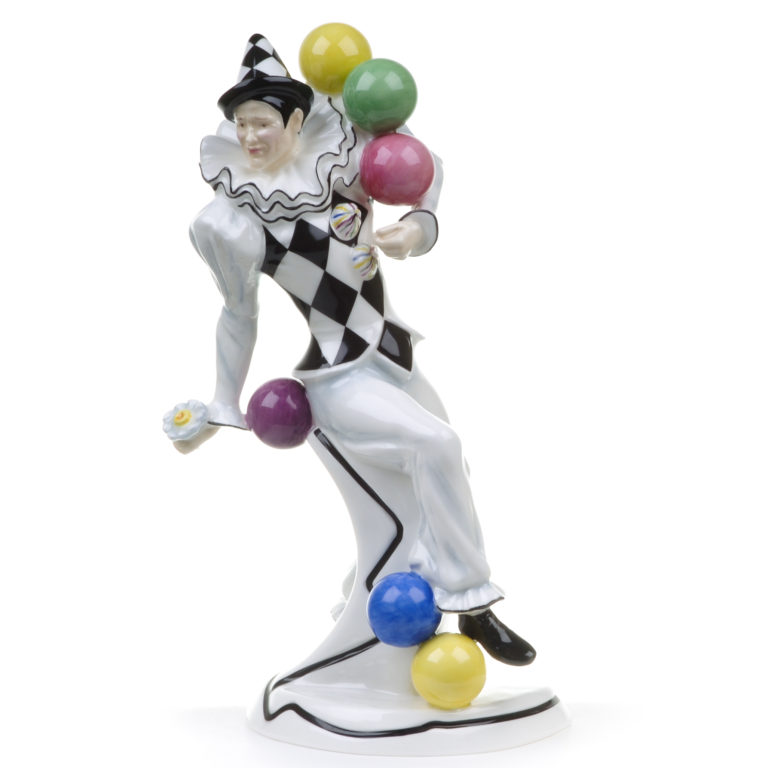 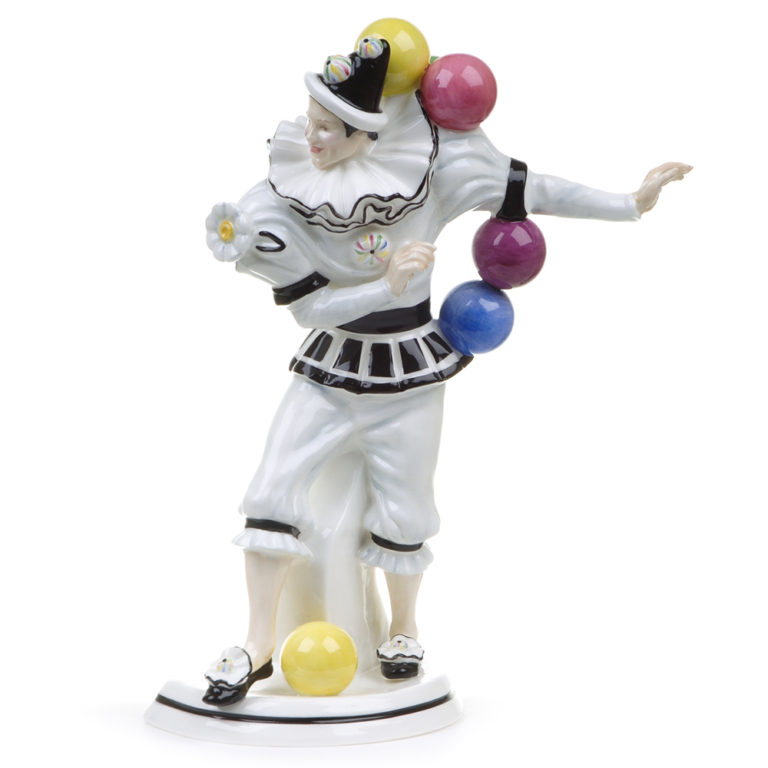