As Good as Gold

Two glistening golden luster plaques depicting fabulous creatures greet visitors at the entrance to our new exhibit Fantastique. They are the work of William de Morgan, a Victorian Arts & Crafts designer who revived the ancient art of metallic luster painting on pottery. De Morgan often escaped into an imaginary world of dragons and monsters, angels and cherubs as a response to the rapid industrial and social changes in the Victorian era.

De Morgan created many weird and wonderful animals to adorn his work. A popular pastime in his family was inventing new hybrid creatures not known in traditional bestiaries and De Morgan’s great sense of humor often shines through in his imagery. These fantasy animals, often with human mannerisms, were much appreciated by the Victorian public who adored fairy tales, myths and legends. William’s sister Mary de Morgan was a popular writer of fairy tales and he illustrated her first book On a Pincushion in 1877 showing his exceptional talents as a draughtsman.

Discerning Victorians also loved De Morgan’s gold and copper luster wares which would glisten and gleam under candlelight and gaslight. He revived the art of ceramic luster decoration in 1873 after an intensive study of Middle-Eastern pottery and Hispano-Moresque wares of the 14th and 15th centuries. Metallic oxides are painted onto the wares and during the kiln reduction firing, oxygen is released from the metallic oxide leaving a shimmering metallic residue on the surface. The firing process is very difficult to control and during his early experiments with his home-made kiln De Morgan destroyed the roof of his house.

One reason that Lusterware became a specialty of Islamic potters was because the use of actual gold and silver vessels for eating and drinking was prohibited in the Muslim faith. So revered was De Morgan’s luster ware in Egypt that the Egyptian government invited him to lecture on the subject in 1892 and reported of his technical virtuosity, “seldom one is met with a such a combination of qualities – with scientific training, artistic perfection and a vivid imagination.”

As the son of a mathematician, De Morgan’s patterns and shapes were often informed by geometrical principles. A traveling exhibition from the De Morgan foundation in the UK entitled Sublime Symmetry currently explores the mathematical concepts which are the basis of his designs. In our Fantastique exhibit some of his dish designs have a vertical line of symmetry running down the center to create a well-balanced design. Coincidentally it also reduced the design process as De Morgan only needed to draw one half of the plate’s decoration.  However, even the backs of De Morgan’s chargers were decorated with continuous circle designs and other patterns devised by his small team of decorators.

At the height of his studio’s popularity, De Morgan had 13 employees to reproduce his designs. The initials of his principle decorators can sometimes be found on the reverse or base of the piece, mainly Fred and Charles Passenger who ultimately took over the pottery. De Morgan’s drawings were usually transferred to his pottery using the pouncing technique by dusting charcoal through a pin-pricked paper design on to the surface of the piece. Many of De Morgan’s shapes were purchased from other factories as he was more focused on decoration than throwing or molding ceramics. His spectacular chargers and rice dishes were used as table decoration as well as wall adornments on plate rails and dressers in Aesthetic homes as can be seen in contemporary photographs and cartoons. Throughout his career, De Morgan produced pottery intended for interiors designed by his great friend William Morris. He sold wares through Morris and Co. and later through his own showrooms in London.

During the Aesthetic movement of the late 19th century, pottery was greatly appreciated as an art form, often imbued with symbolic meaning. The most extreme collectors were lampooned in the popular press, for example George du Maurier’s cartoons for Punch magazine in 1874. In his Acute Chinamania, a distraught woman bewails the breakage of a favorite pot asking her daughter “What have I left to live for?” In Chronic Chinamania, an art pottery dealer romances one of his dishes with an obvious crack on the back.  “This is the Cream of my Collection, ladies and Gentlemen. It is quite Unique. It was made by the Fallbrok Pottery that was started in 1870. It took them three years to produce this Plate, their only one, and then…...”

This caption could easily be read as a satirical description of De Morgan’s pottery as he was not a good businessman and was continually broke. His great sadness was that by the time he had finally perfected his lusterware the vogue had passed and “nobody wants them.” To pull him out of his depression his doctor advised him to write and this led to his very successful second career as a novelist. He once said, “I turned from tiles to tales and from pots to plots.” 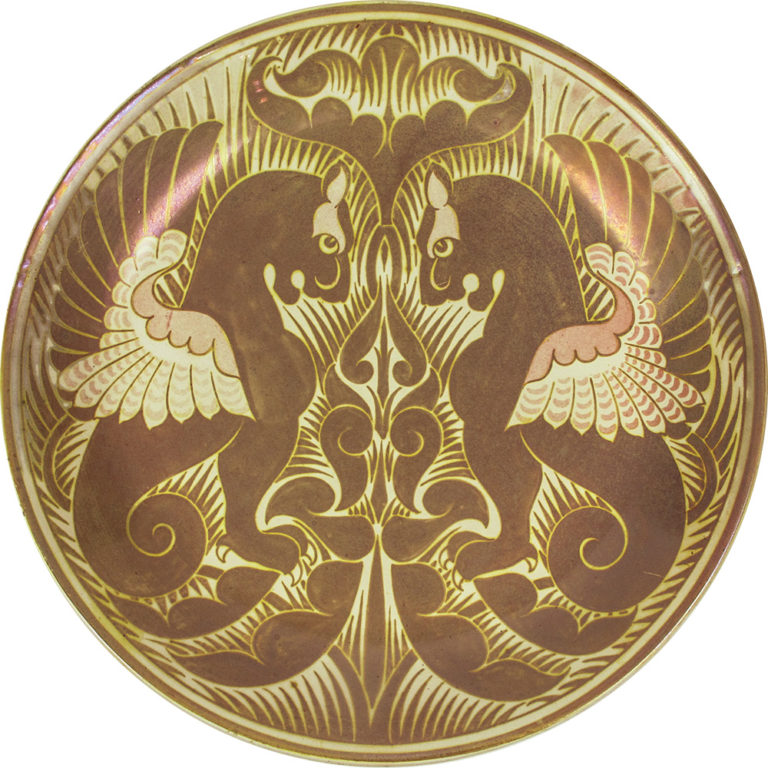 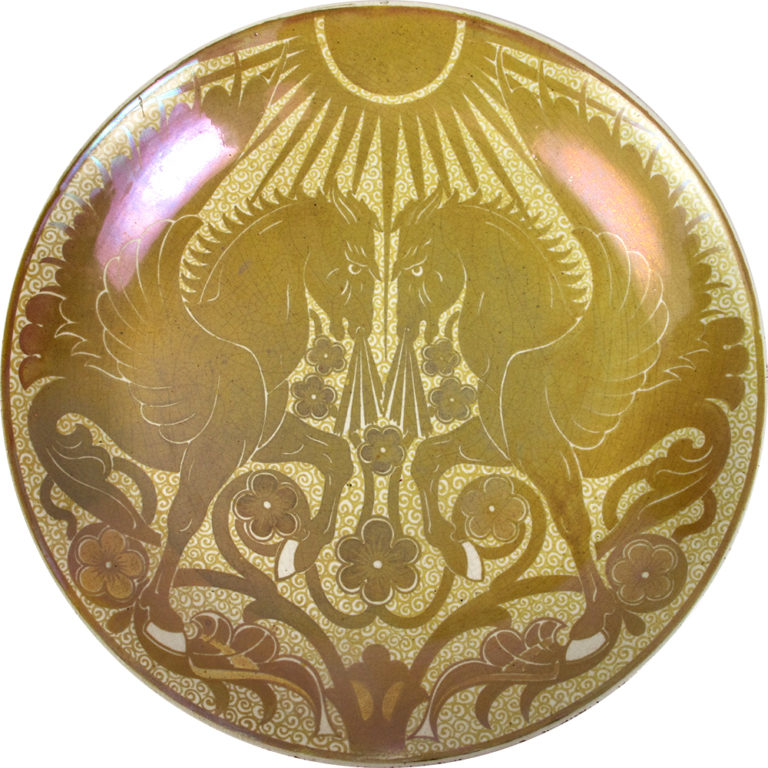 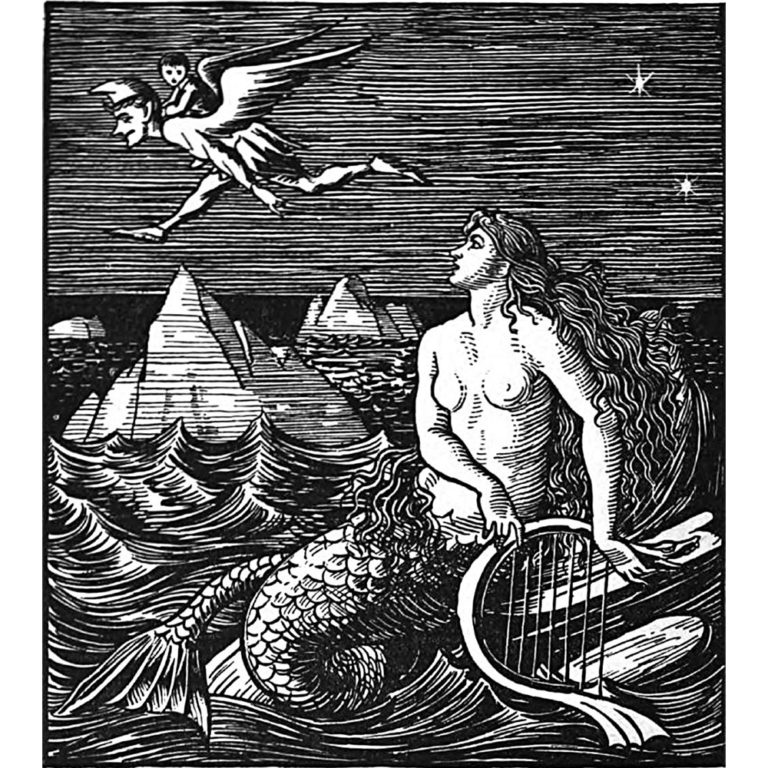 Illustration for On a Pincushion by W. De Morgan 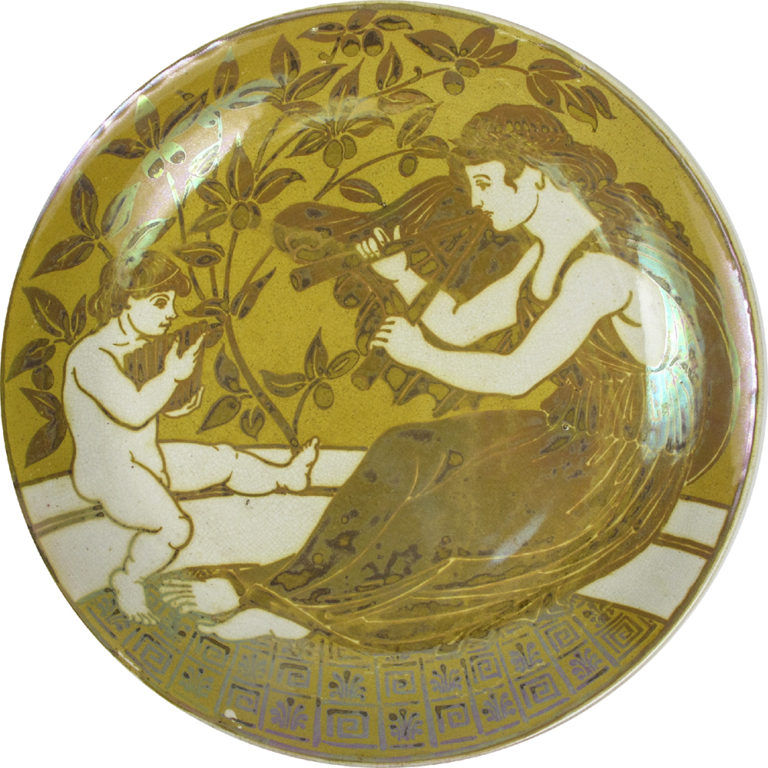 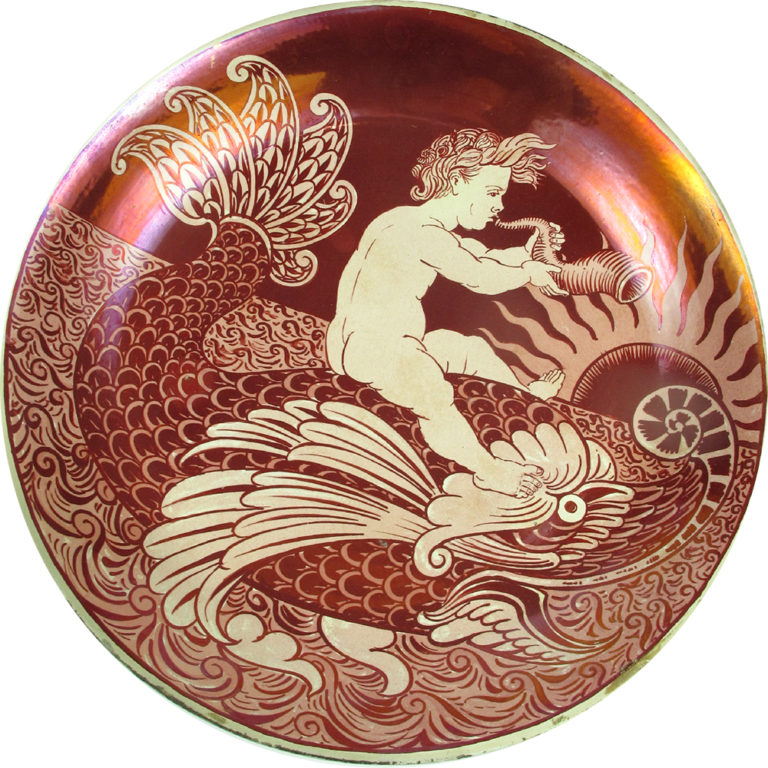 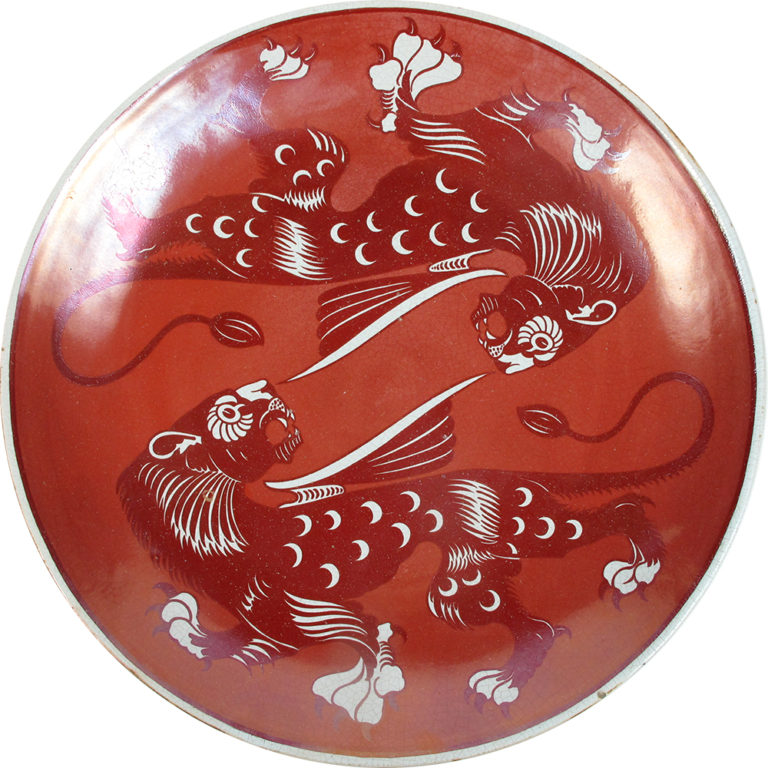 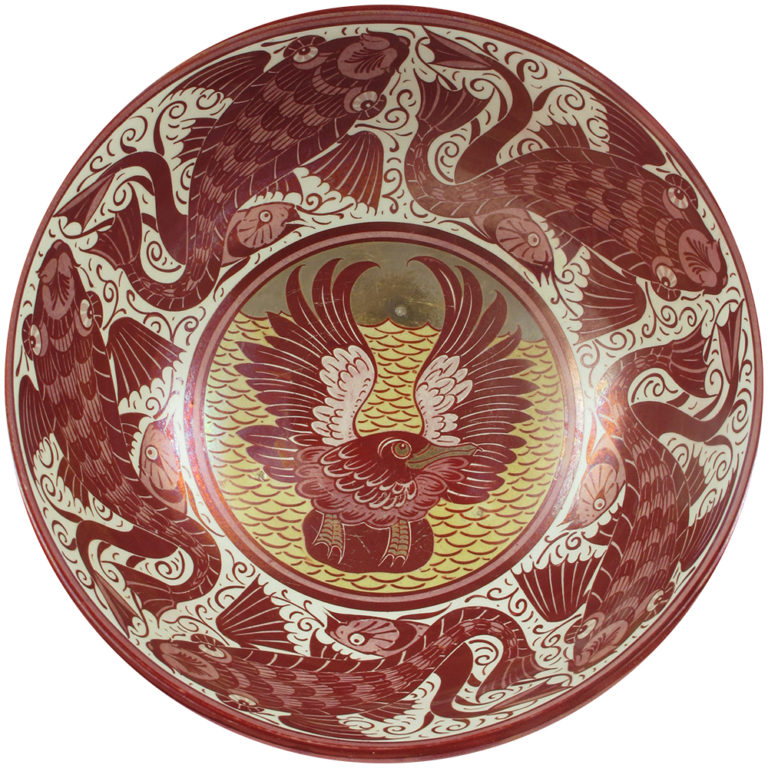 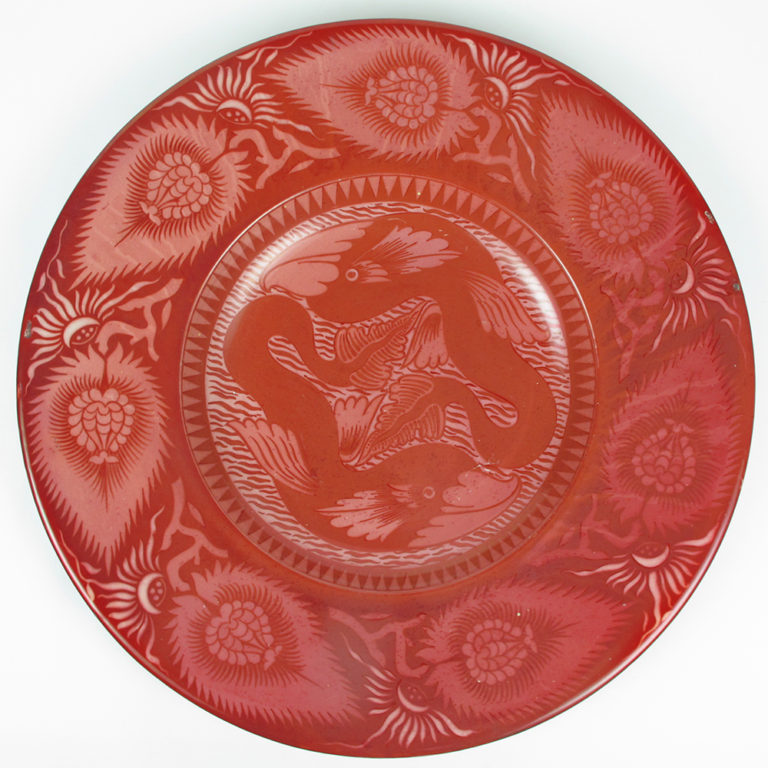 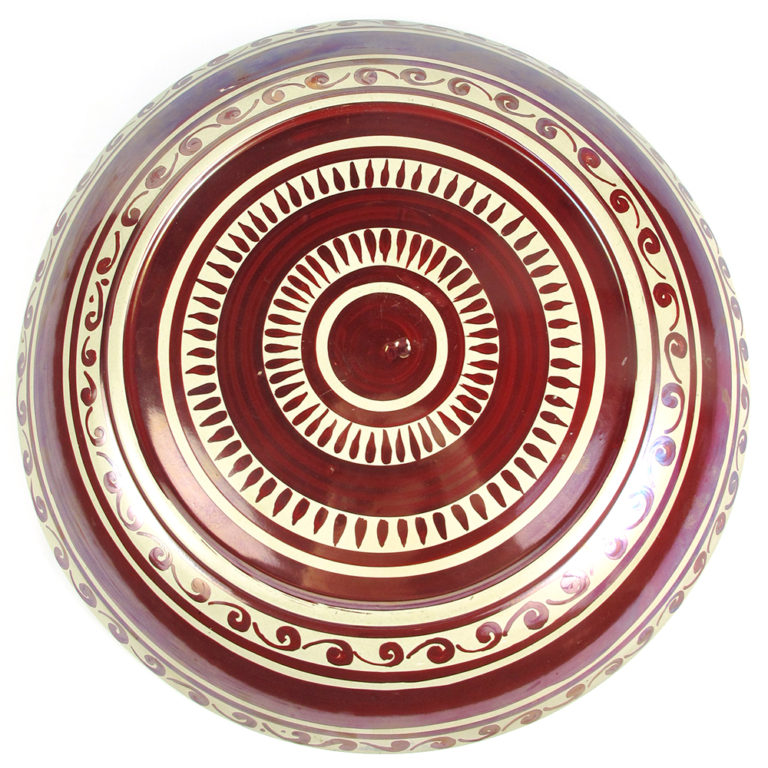 Back Detail from Cupid & Dolphin 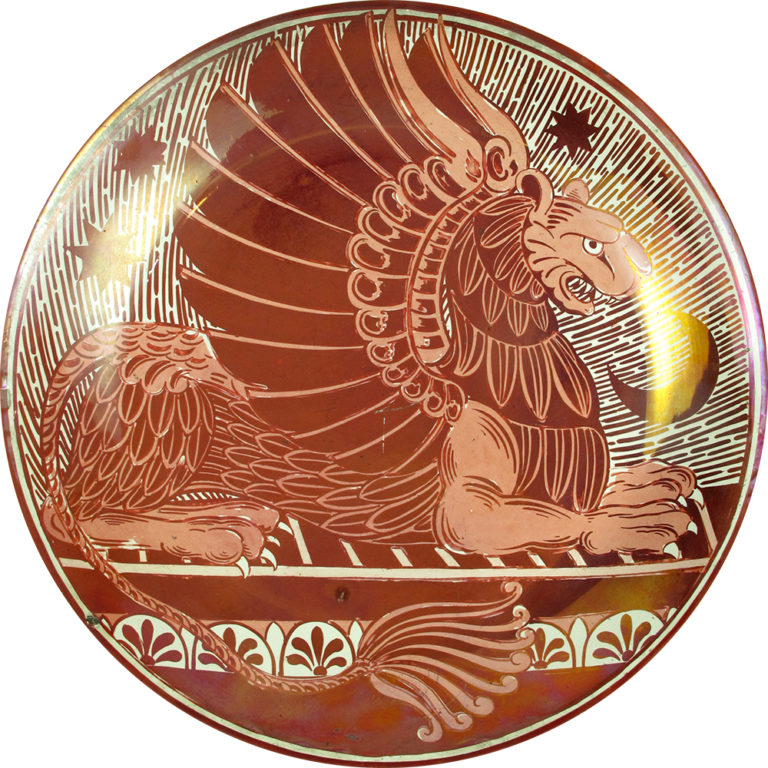 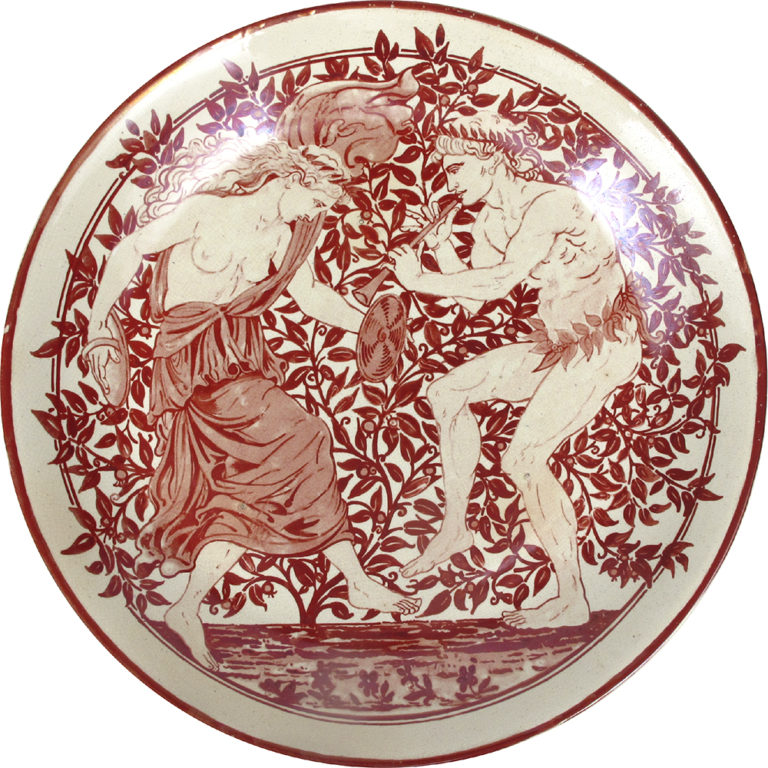 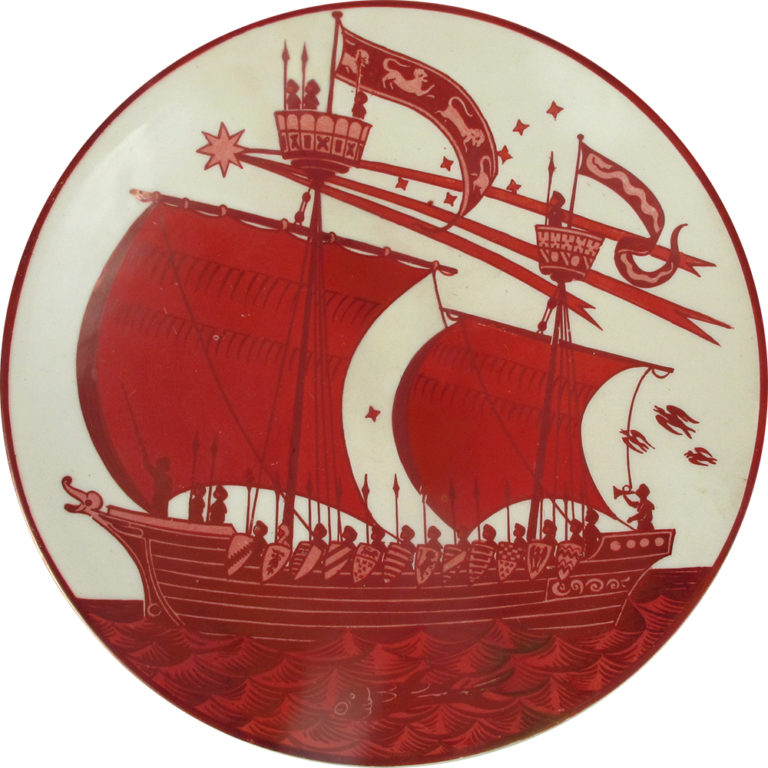 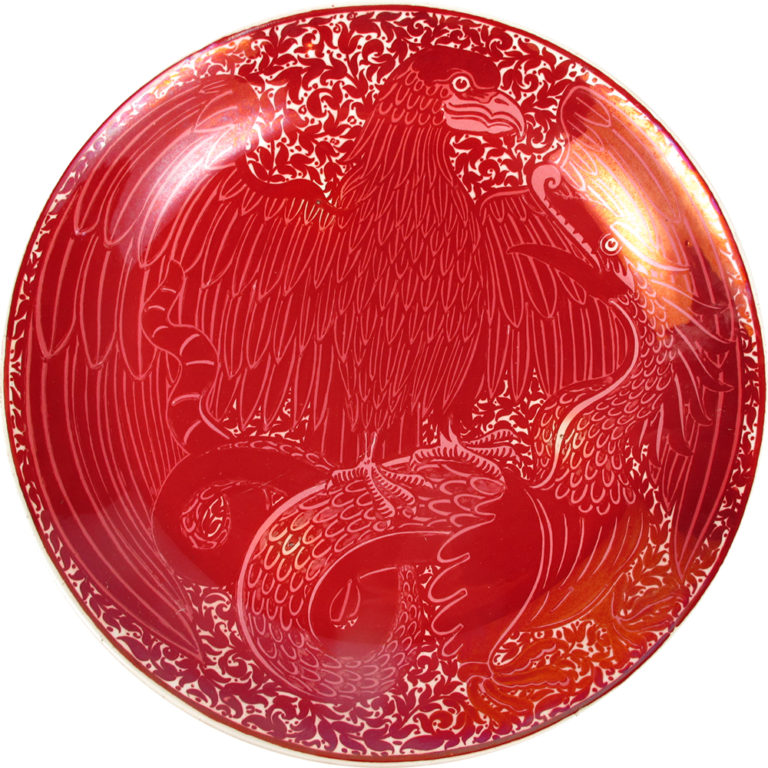 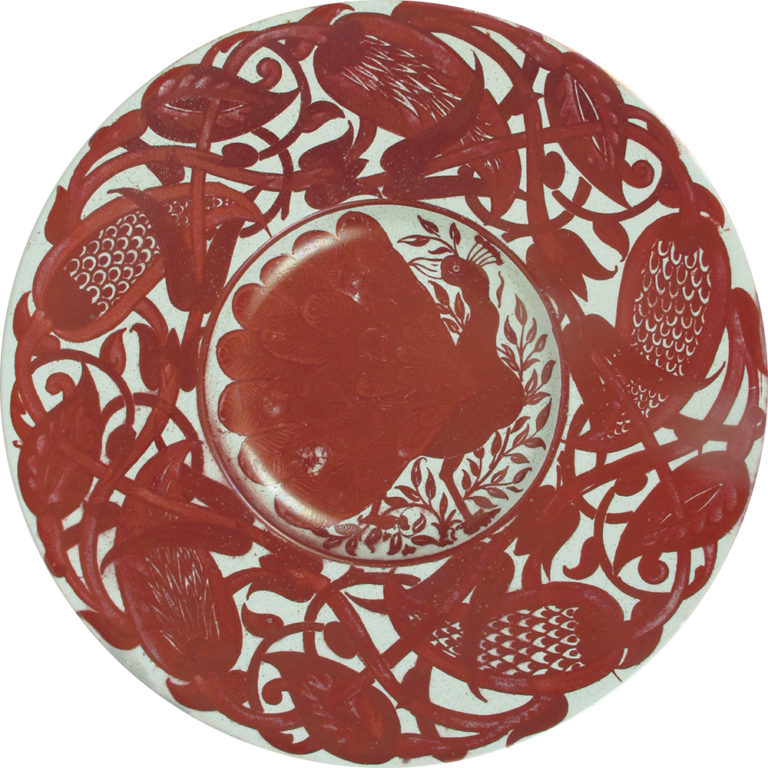 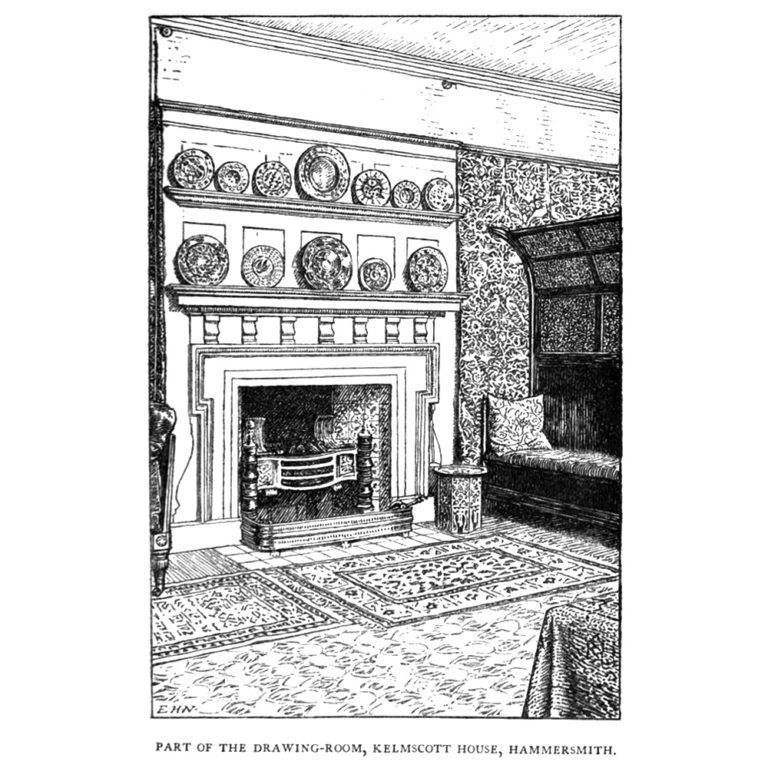 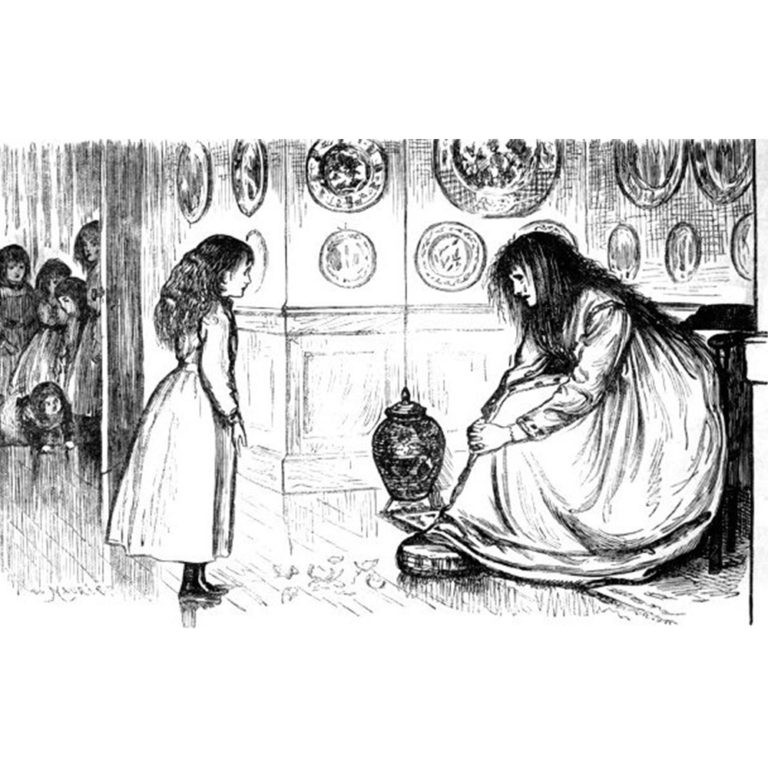 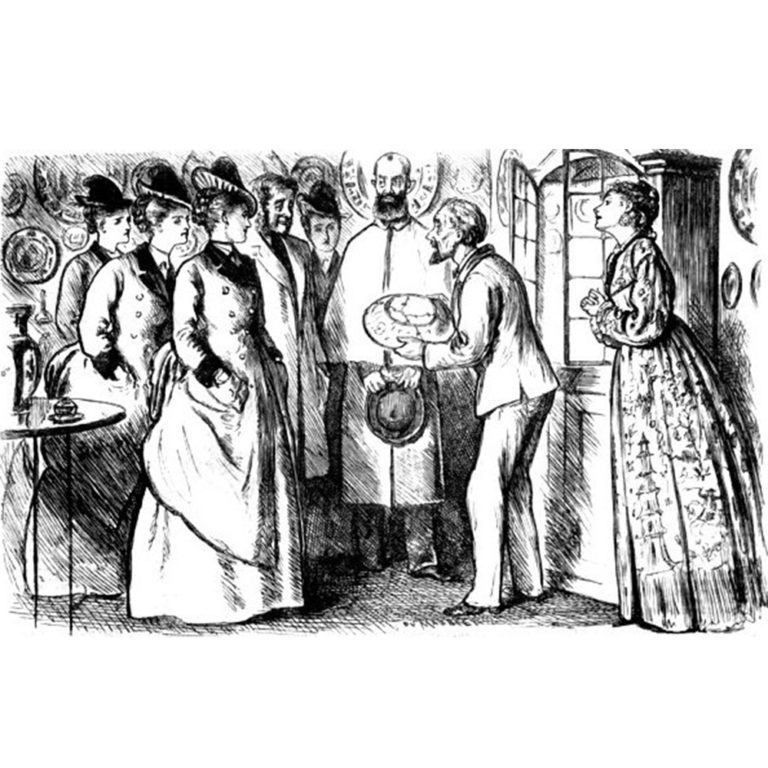 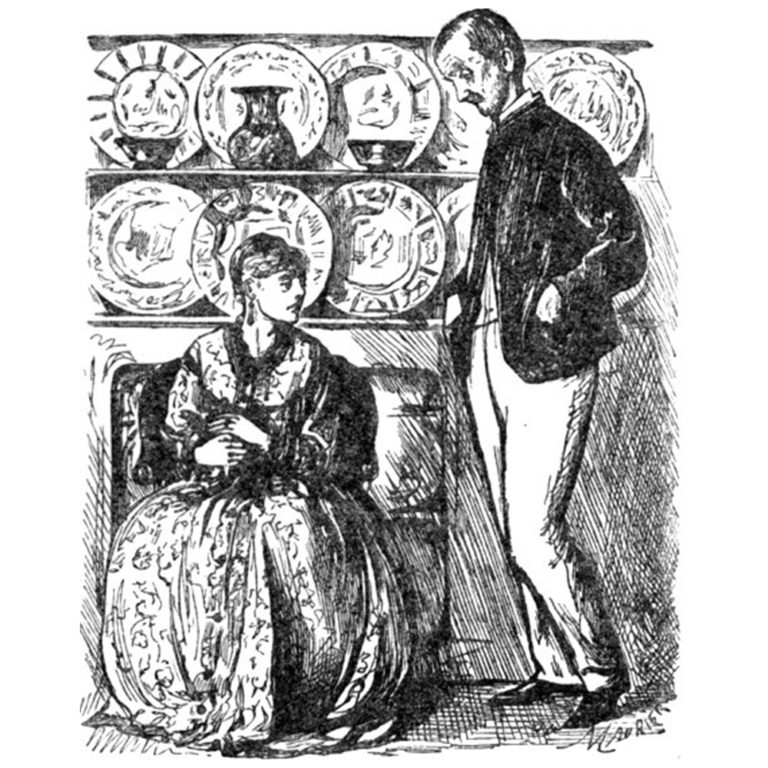 Your ticket for the: As Good as Gold

As Good as Gold