We’re delighted with the popularity of our Carnival & Cabaret exhibition and we’re “pleased as Punch” to highlight one of the most colorful characters in the show. Discover how the grotesque Pulcinello from the Italian commedia dell’Arte became a popular children’s character in the traditional Punch & Judy puppet show.

Mr. Punch derives from Pulcinello, an ugly hump-backed character who pursued the beautiful Columbine in the Italian commedia dell’arte. Italian puppeteers adopted Punchinello, as he became known, and introduced their traveling marionette shows to England during the 17th century. Starved of theatrical entertainment during the puritanical Commonwealth years, the Restoration audiences responded enthusiastically to the slapstick style of humor. Samuel Pepys recorded in his diary that he had greatly enjoyed an Italian puppet play which he saw by chance in Covent Garden, London. Mr. Punch also became popular in Britain's American colonies and George Washington bought tickets for a show.

By the late 18th century, it was more common to see Mr. Punch in his traditional English form as a glove puppet, which was operated in a portable booth by a single puppeteer who became known as a professor. He uses a swazzle device, like a miniature kazoo, in his mouth to produce Punch’s distinctive squawky voice.  Sometimes the professor had a partner called a bottler, who played the drums and pan pipes to attract customers and collected the money afterwards. A dog called Toby was often part of the act, attacking Punch and performing simple tricks. The Doulton stoneware clock case by George Tinworth from the 1880s and the Charles Vyse figure from 1928 both feature Toby and a bottler.

Punch’s original puppet entourage generally included his long-suffering wife Judy, their baby, the beadle, who was an early type of policeman, the doctor, the hangman and the devil. The violent pantomime plot varies and has been modified over the years to be more politically correct. It normally begins with Punch mishandling his baby in a fit of anger. In retribution Judy attacks him but she in turn is beaten. A doctor, who comes to treat Punch, also gets a taste of his slapstick, and the mayhem attracts the attention of a police officer. Punch is arrested and sentenced to death but he beguiles the hangman into putting his own head in the noose. Finally, he is visited by the devil who he outwits also. Invariably, Punch is depicted as gleefully self-satisfied with his evil deeds, squawking his catch-phrase "That's the way to do it!"

The allegorical significance of the drama as this anarchic Lord of Misrule triumphs over life’s adversities, including disease (symbolized by the doctor’s death) and death (personified by the hangman) is generally lost on most spectators. The adult audiences of the past delighted in the subversive and satirical connotations of the humor and the burlesque comedy. Children, often the chief customers, are usually too busy shrieking warnings to Punch’s victims although a favorite childish prank was to look behind the curtains of the puppet booth during the performance. George Tinworth, Doulton’s first artist, recalled this mischievous behavior in his autobiography and his stoneware model of the Playgoers features a little mouse peeping behind the scenes.

The hook-nosed puppet was a familiar feature of Victorian life. The gaily striped booth was often pitched at street corners in major cities where a receptive audience gathered to watch the comic capers of Punch and Judy and hopefully pay for the privilege. Punch and Judy shows were also popular attraction at Victorian fairs and markets. Charles Dickens was fascinated by the nomadic lifestyle of the Punch professors and he features one in the Old Curiosity Shop. One of the most famous movie portrayals of a Punch & Judy show is in the Marx Brothers comedy  Monkey Business (1931) where Harpo joins a famous American Punchman Al Flosso to avoid capture on a ship he has stowed away on.

Mr. Punch also inspired a weekly satirical magazine, renowned for its irreverent cartoons.  Punch or the London Charivari was first published in 1841 and the original cover illustration was modeled for a rare Doulton stoneware liquor flask from the early 1850s. The reverse shows Punch riding on an ass led by a Greek satyr. Mr. Punch is also depicted on a Wedgwood Creamware bottle from the 1880s with a hooked nose Punch finial.

When the British public began to spend their annual holiday at the seaside, the Punch and Judy man followed in search of a more lucrative clientele. Today these genial entertainers are often sponsored by local authorities to appear at popular beach resorts and summer fairs. For the largely juvenile audiences, the devil and the hangman have been replaced by a voracious crocodile crunching strings of sausages, but the indomitable spirit of Mr. Punch lives on “That’s the way to do it!” 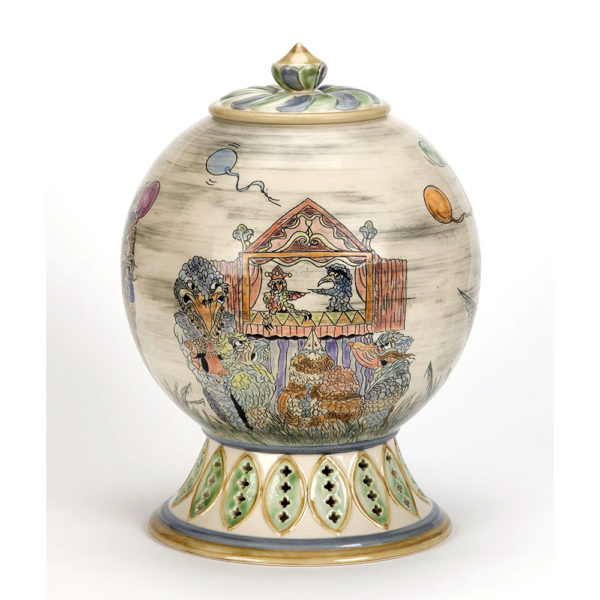 The Fair by A. Hull 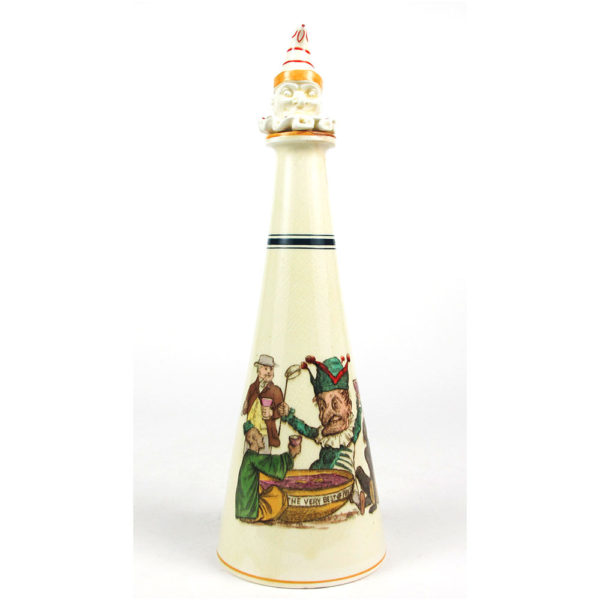 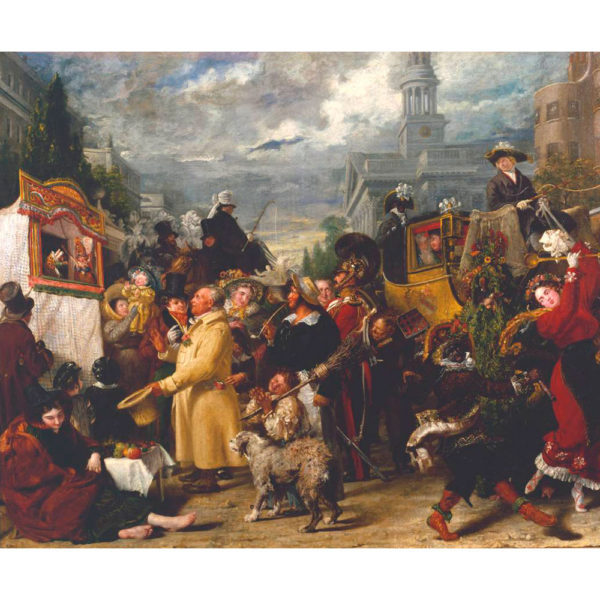 Punch on May Day <br> by B. Haydon 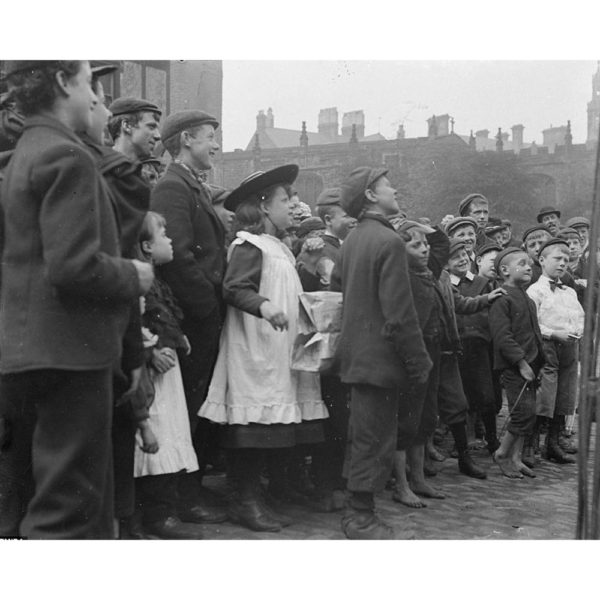 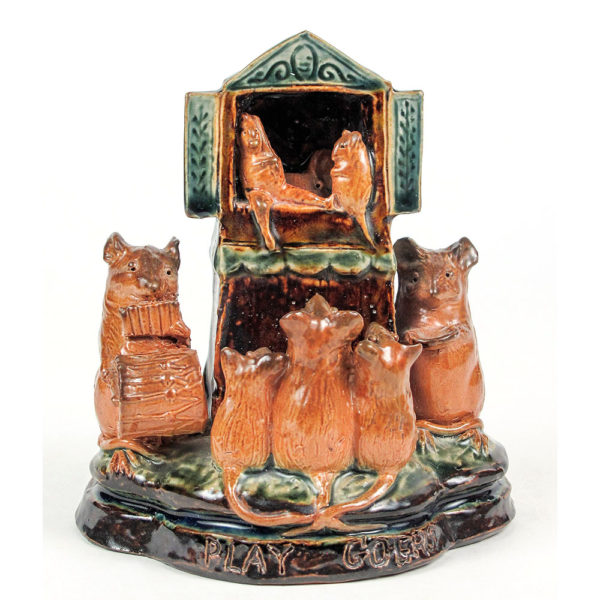 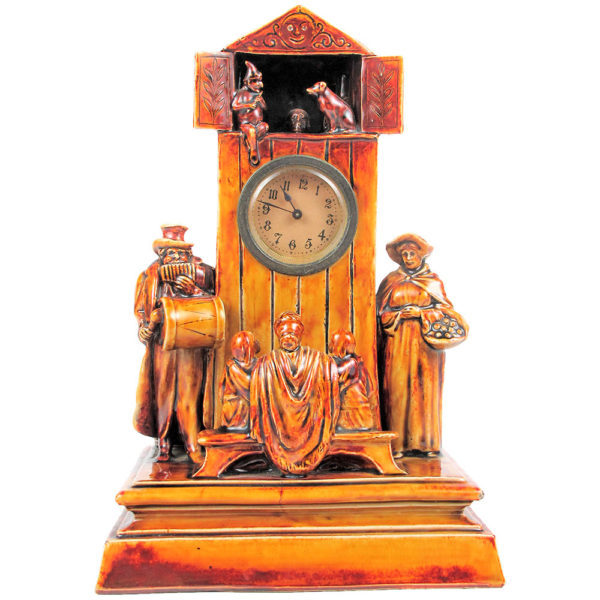 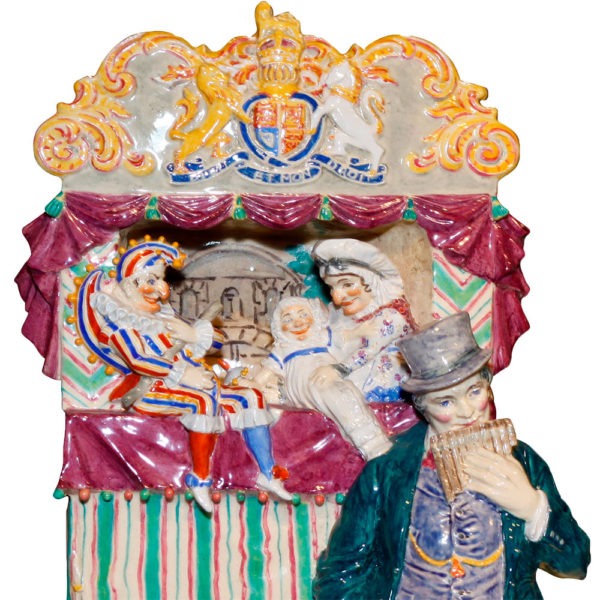 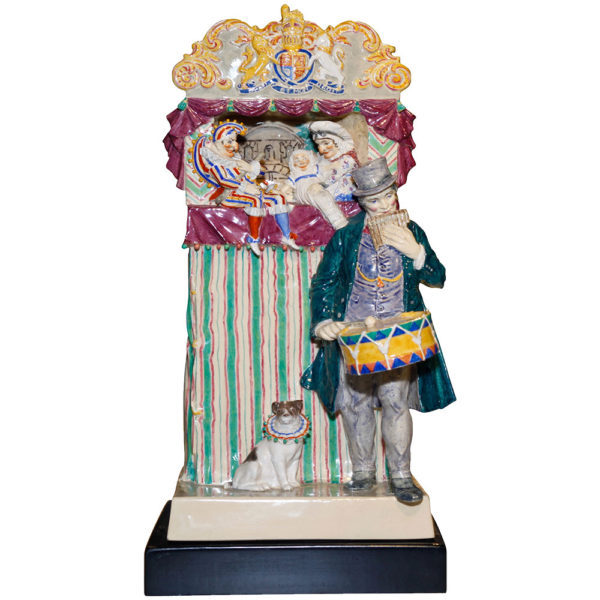 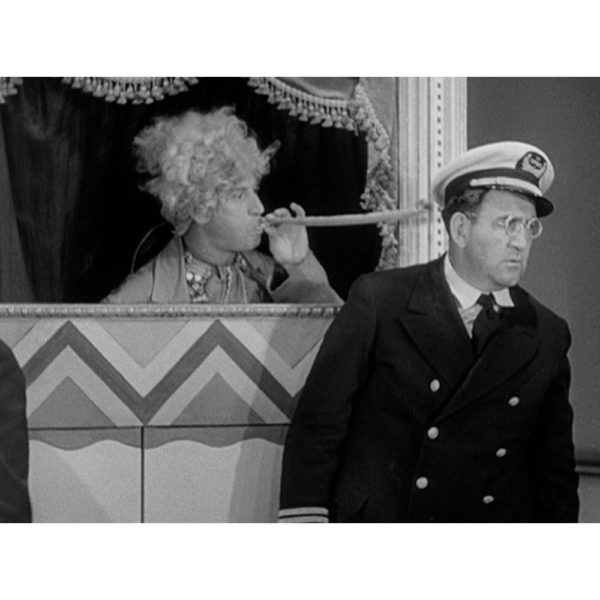 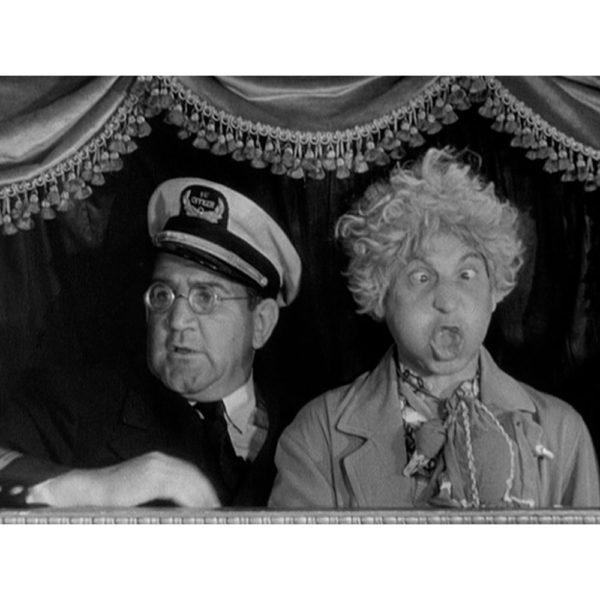 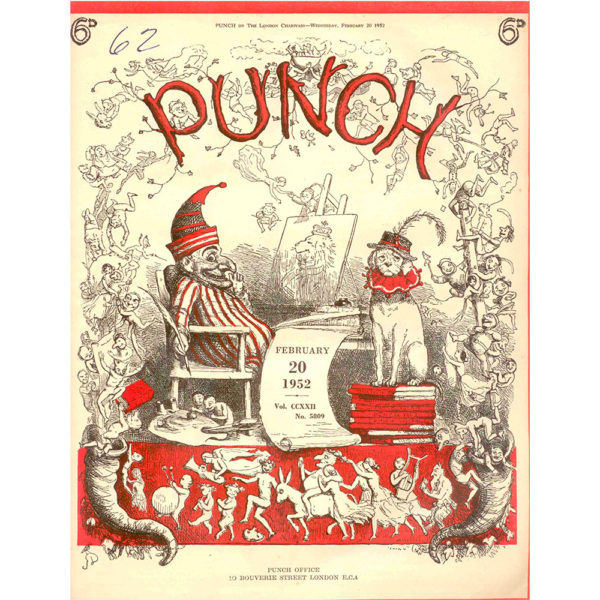 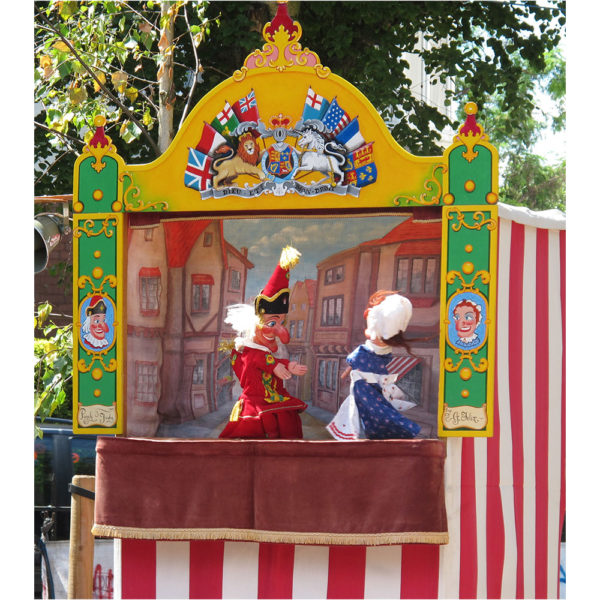 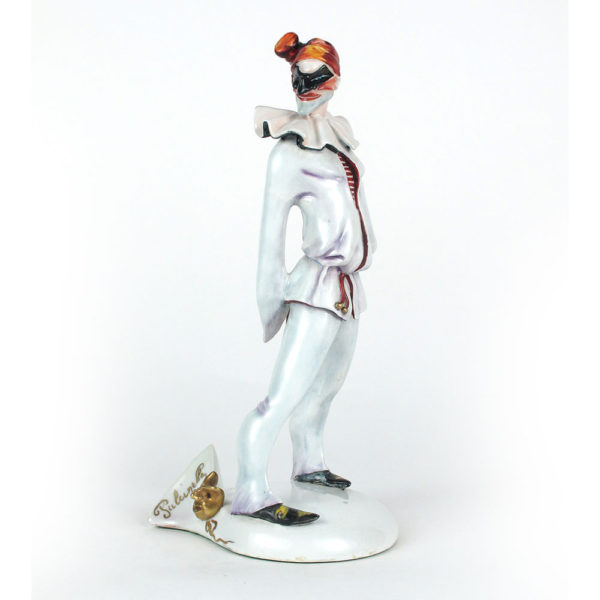 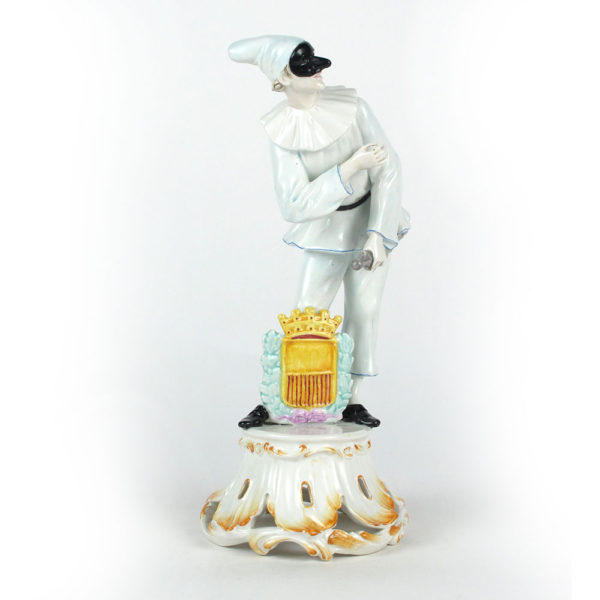 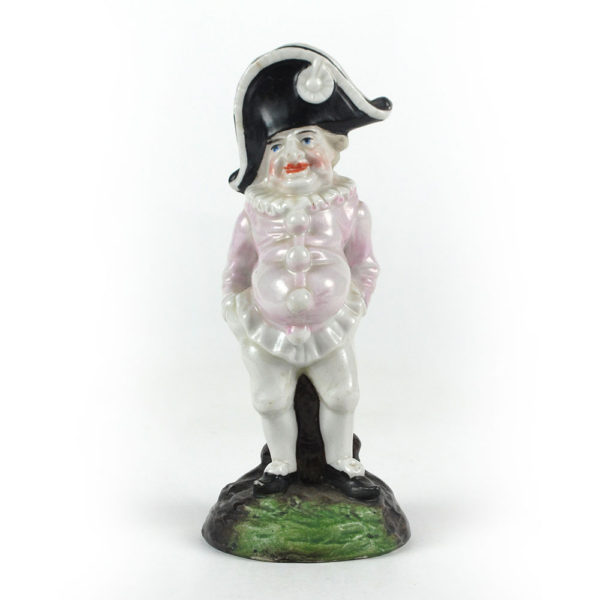 Your ticket for the: Pleased as Punch