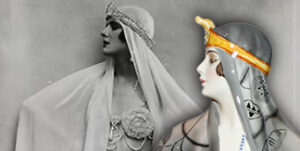 During Women’s History Month, Louise Irvine is celebrating the Centennial of women’s right to vote and highlighting their achievements as designers and muses in the fired arts during the roaring twenties. Votes for Women The women’s rights movement began nearly a century before the vote was finally granted. There were differences in campaigns and strategies on both sides of the Atlantic, but some US states had given women the right to vote by the end of the 19th century. Finally, on August 20, the constitution was ratified, enfranchising all American women. In the UK, militant suffragettes broke windows, started fires and went on hunger strike when they were arrested. Cartoonists lampooned the excesses of the suffragettes and the Doulton pottery produced inkwells of an ugly woman and her baby mocking the movement. Agitation for women’s suffrage succeeded in 1918 when a law was passed extending the vote to women of 30 or over. Victory celebrations were subdued during World War One, but the campaign was revived and in 1928, the age limit was reduced to 21 and voting rights between men and women were equalized in the UK. Flappers, Vamps & Divas Flappers flaunted their disdain for social norms and epitomized the Roaring Twenties. They wore short skirts, bobbed their hair, and listened to jazz during the Art Deco era. The slang word ‘flap’ originally meant a young prostitute but by the late 19th century it was used in a less derogatory sense to describe a lively teenage girl. The success of the suffragettes after World War I led to the emancipation of women and a relaxation of moral codes in society. Flappers worked outside the home, drove around in fast cars, smoked cigarettes and drank alcohol at lurid parties, which shocked the older generation. Vamps, derived from vampires, are also known as femmes fatales. The allure and charms of these seductive women ensnare their lovers, often leading them into fatal situations. The femme fatale was often portrayed as the evolution of an evil goddess or a remorseless queen from the ancient world. Her ability to entrance her victim verged on the supernatural and she could suck the virtue out of good men like a sexual vampire Divas are women of outstanding talent, derived from the Italian for a female deity. They originated as singers in opera but are now recognized in all the arts. A “diva attitude” implies a woman who is difficult to please. Divas in the fired arts during the Art Deco era included Daisy Makeig Jones, the creator of Wedgwood’s Fairyland Lustre Ware, and Clarice Cliff, designer of Wilkinson’s Bizarre Ware. Both these women had extraordinary careers in the British Potteries, a world dominated by men. Traditionally, women were decorators, hand-painting or applying transfers on the factory floor, and it was unusual for them to be acknowledged as leading designers. Read more… Clarice Cliff: A Bizarre Affair Daisy Makeig Jones: Bowled Over by Fairyland Exhibition Women in the Pottery Industry: Women at WMODA

Copy and paste this URL into your WordPress site to embed

Copy and paste this code into your site to embed